Question 1.
What is the unit of the nervous system?
(a) Nephron
(b) Neuron
(c) Brain
(d) Spinal cord
Answer:
(b) Neuron

Question 2.
How many cranial nerves are found is a man?
Answer:
12 Pairs.

Question 3.
Which is the longest cell?
Answer:
Nerve cell (Neuron)

Question 1.
Which are two parts of the autonomous nervous system?
Answer:

Question 3.
Write one function of the following:

Question 4.
Write the main parts of the brain.
Answer:

Question 5.
Write the name of the fluid-filled in the cavities of the brain.
Answer:
Cerebro – Spinal Fluid (CSF) 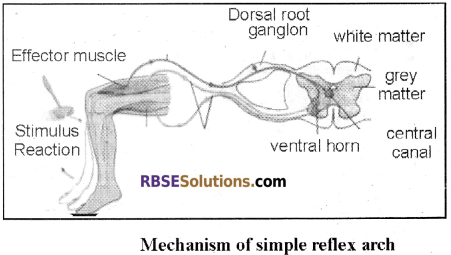 Question 2.
Describe the structure of the brain of a man with a diagram.
Answer:
Structure of Brain:
The human brain is divisible into 3 parts –

Functions of the cerebrum:

The function of the hypothalamus: 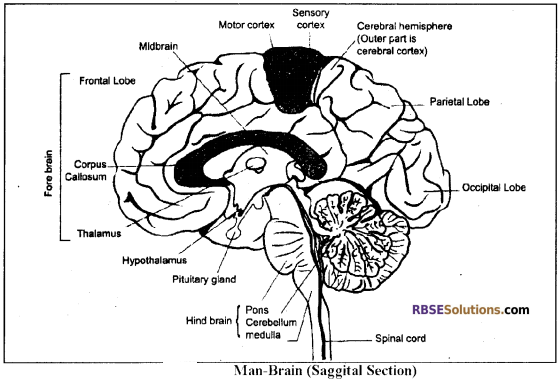 2. MidBrain:
It is the middle part of the brain and also called as mesencephalon. It consists of two parts –

1. Cerebellum: It is the second largest. It part consists of two lobes. Dorsal side of cerebellum is well developed. Its two main functions are –

2. Pons Varolli: It lies just above medulla oblongata and below cerebral peduncle. It joins both lobes of the cerebellum and also other parts of the brain.

3. Medulla Oblongata: It is the posterior-most part of the brain, It is triangular and situated between the pons and spinal cord. Its cavity is called metachronal and medulla continues as the spinal cord. Functions of medulla oblongata are: 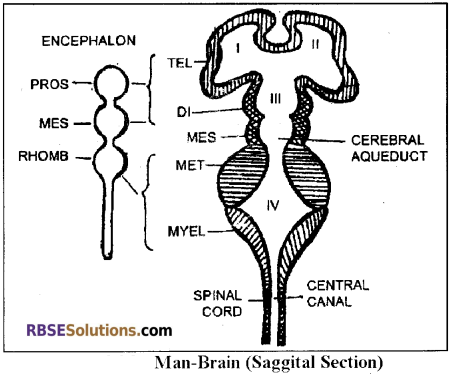