Question 4.
It has two sharp tips.
(i) divider
(ii) Ruler
(iii) protector
(iv) None of these

Question 5.
A line joining the two points of circumference and passing through center of circle is called.
(i) diameter
(ii) center
(iii) radius
(iv) None of these

Question 7.
Shaded part in figure is.
image
(i) Chord
(ii) Semi – circle
(iii) Circumference
(iv) None of these

Question 1.
Divide each of the following angle (RBSESolutions.com) in right, straight, acute, obtuse and reflex angle. 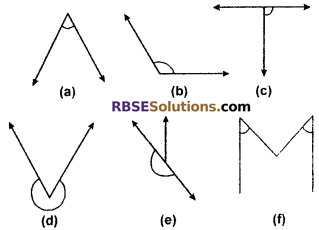 Question 2.
With the help of a protractor, (RBSESolutions.com) measure and write the measurement of following angles. 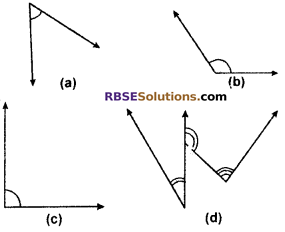 Question 3.
Find the measurement of each angle in following figures. (Observe with and without protractor) 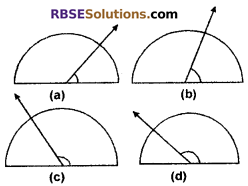 Question 4.
Draw any circle and (RBSESolutions.com) mark the following.
(a) Its center
(b) A radius
(c) a diameter
(d) A sector
(e) A circle segment
(f) an internal point
(g) An external point
(h) An arc
Solution:
We draw a circle, whose parts is as below. 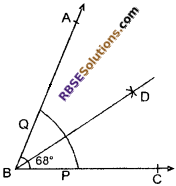 Bisecting :
With point B as center draw an are with (RBSESolutions.com) compass which intersects the sides of angle B at P and Q, With P as center, keeping the same width of compass draw an are within the area of the angle. Similarly with Q as center and the width of compass as before, draw an arc intersecting the previous arc. Label the intersection as point D. Join D and B gives the bisector BD of angle B. ∠ABD and ∠DBC are equal.