(1). Which is not a natural landform of the following?
(a) Mountain
(b) Plateau
(c) Domicile
(d) Plains
Answer:
(c) Domicile

Question 2. Fill in the Blanks :

Question 5.
What is food chain? Explain with example?
Answer:
Food chain : The Sun is the main source of energy for terrestrial animals and plants. Plants make food by taking energy from the sun. This energy which is stored in the plants is transferred from one being to another creating a chain.The transfer of energy through food is called food chain.

Example : Plants make their food from the energy from the sun, they derive the reQuestion uired nutritious minerals from the earth, from the plants, the insects obtain their food, insects become food for rats, rats further become food for snakes, and snakes are eaten by eagles, after the death of eagle, the decomposing bacteria decompose the dead eagle into the soil, this is how food completes its cycle.

Question 7.
What is Island? Are they found only in sea?
Answer: That land which is completely surrounded by water on all the sides, is called an island. It is not compulsory that islands are always found in seas, they can exist in rivers, lakes or oceAnswer: Andaman and Nicobar islands and Lakshdweep are some important islands found in Indian Ocean. The Majuli Island on the river Brahmputra is the largest river in island in the world.

Question 8.
How many types of plains are there? Explain their main importance with example.
Answer:
The flat surface of the earth is called plains. The height of such place from sea level is on an average less than 300 mts. These are created by soil deposit from rivers. On the earth’s surface plains cover approx 50% of the total area. There are mainly two types of plains :

(i) Coastal plains : These are found near seas and are mainly created by sea waves. They are less wide and these are good for constructing sea ports. Such as Konkan and Malabar in India. People visit these places for entertainment and they are often used for pisciculture.

(ii) Internal plains : The plains created by deposition of fertile soil by rivers on the main land are called internal plains. Such as the plains of Ganga and Brahmputra in India . Due to high fertility of the soil, these plains are important for agriculture and because they are flat, transportation is made easy through roads and railways. Since the availability of basic necessities for living is easy, the population density is high.

Question 1.
Try to find out which landform is present in your village/city. Make a picture of near by land form.
Answer:
The landforms of our village is extensive plains. It is flat area and it is approximately 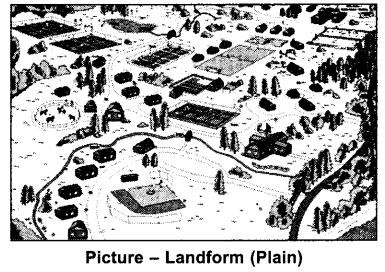 300 m above sea level. The land is fertile and it is an agriculture area. 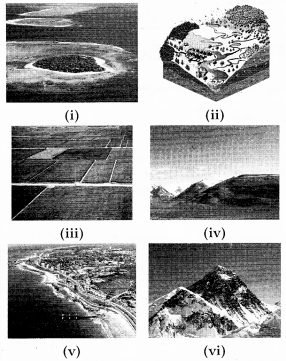 (i) Island : Land which is surrounded by water from all sides is called an island. It can be located anywhere-in rivers, lakes, sea or oceAnswer: In general, islands are tourist places and due to being small in size most of them have less population.

(ii) River Basin : That place or surface area where the main river and its tributaries flow is called the river basin. The rivers provide with us perennial water for agriculture.

(iii) Plains : The plains are the most densely populated parts of the earth’s surface. The plains are very fertilelands created by rivers where along with agriculture, trade, industries and transportation have a widespread network.

(iv) Plateau : The land with low gradient and which is flat on the top is called plateau. The high plateaus serve, as—pastures and the low plateaus are used for agriculture. Some plateaus are also important source of minerals.

(v) Coastal plains : The land surrounding the sea is called coast. These coastal plains are used for fisheries, agriculture and tourism.

(vi) Mountain : Those parts which are approximately higher than 600 meters or more than their surrounding areas are called mountains. The mountains are colder than the plains. They play an important role for rainfall. Step farming is done on the slopes of the mountain. Mountain area is inhabited by wildlife and some tribes also live here.

Question l.
What is the primary source of energy on the earth?
(a) Coal
(b) Petroleum
(c) Sun
(d) None of these
Answer:
(c) Sun

Question 4.
Most of the mineral deposits are found in:
(a) Mountains
(b) Plains
(c) Plateaus
(d) Coastal areas
Answer:
(c) Plateaus

Question 5.
The naturally flowing single stream of water is called.
(a) Waterfall
(b) Tributary
(c) River
(d) All of these
Answer:
(c) River

Question 2.
What is food chain?
Answer:
On the various levels of the biosphere there is systematic arrangement of food/energy transfer which is called food chain.

Question 4.
Name the highest peak on the earth?
Answer:
Mount Everest-8848 meters, which is situated in the Himalayan mountain ranges.

Question 5.
What are mountain range?
Answer:
When mountains lie in one or more than one (parallel) on a straight seQuestion uence they are called mountain range.

Question 7.
Describe plateaus?
Answer:
Those low gradient areas which are high and broad and are flat on top are called plateaus. Deccan plateau, Chhota Nagpur plateau are example of plateaus in India.

Question 8.
What do you mean by river basin?
Answer:
The plain where the main river and its tributaries flow is called river basin.

(i) Plant-kingdon : Which comprises of all plants, trees, shrubs and grasses.
(ii) Animal kingdom : Which includes humans, all organisms living in water on land and in air.

Today humans have brought-both relative and absolute changes in the environment. These change may be right or wrong. We are irrigating desert for agriculture and on the other side we are cutting forests. In reality every living organism is important for maintaining environmental balance. Every organism found on the earth is important. So every organism should be protected.

Question 5.
Describe the types of rivers according to the availability of water.
Answer:
The naturally flowing single stream of water on the surface of earth is called river. Rivers always follow the slope. Rivers usually originate from high mountain areas. Those rivers which have their origin on very high mountains, get water from rainfall as well as from the melting snow. These rivers continuously flow all the year round and are called perennial rivers, such as the Ganga and the Yamuna. Some rivers flow only in the rainy season. These are called seasonal rivers. The Luni river in Rajasthan is an example of seasonal river.

Question 1.
Describe the utility of oceans.
Answer:
Oceans are spread on 3/4th part of the earth’s surface. Mainly there are four Oceans on the earth,

Their utility is mentioned below :

Question 2.
What do you understand by mountain? Describe its characteristics.
Answer:
That area of the earth surface which is 600 meters or more higher than its surrounding area and extends to thousand kilometers in length is called mountain.
Special Characteristics of Mountain :