Question 4.
The number of neutrons in deuterium, an isotope of hydrogen is:
(A) one
(B) two
(C) three
(D) None
Answer: A

Question 10.
What is the charge on neutron?
Answer
Neutron carries no charge, i.e., the neutron is a neutral particle.

Question 12.
Who discovered proton?
Answer
Proton was discovered by Goldstein.

Question 13.
What is an electric discharge tube? Explain with a diagram.
Answer 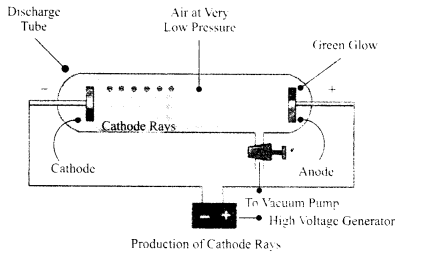 Electrical discharge tube:
Electrical discharge through gases is studied by using a specially designed glass tube commonly called a discharge tube. It consists of a cylindrical glass tube having a side tube, and two metal electrodes, one at each end. These electrodes can be connected to the respective terminals of a high tension power supply. The air inside the tube can be pumped out by connecting the side tube to a vacuum pump, and the desired pressure can be maintained inside the tube.

Question 14.
Explain the postulates of Thomson’s model of an atom.
Answer 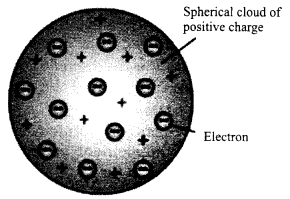 Thomson suggested that an atom is positively charged sphere of radius 10-8 cm. Negatively charged electrons are embedded in the sphere like plums in the pudding, or like the seeds in the edible red interior of a watermelon.

Since the two types of charges are equal in amount, the atom on the whole electrically neutral. It is also known as the plum-pudding model.

Question 19.
Describe Rutherford’s nuclear model of an atom with the help of the gold foil experiment and well-labeled diagram.
Answer 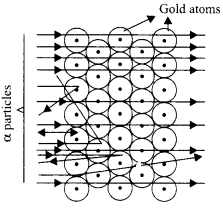 Rutherford designed an experiment in which fast-moving alpha-particles were made to fall on a thin gold foil. On the basis of the experiment, Rutherford proposed a model of an atom as follows:
(a) There is a positively charged region located at the center in an atom called the nucleus. Nearly, all the mass of an atom resides in the nucleus.
(b)The electrons revolve around the nucleus in well-defined orbits.
(c) The size of the nucleus is very small as compared to the size of the atom.

Question 20.
Describe the main postulates of the Neils Bohr model of the atom. Draw and explain the atomic structure of Na and K based on it.
Answer
Bohr’s model of an atom:
1. An atom is made up of charged particles, electrons, and protons. Electrons are negatively charged, whereas protons are positively charged.
2. The electrons revolve around the nucleus in fixed orbits called energy levels or shells which are represented by numbers 1, 2, 3, — or letters K, L, M, N, — counted from the nucleus outwards.
3. Protons are present within the nucleus. Due to the presence of protons, the nucleus is positively charged.
4. Each energy level has a fixed amount of energy. The energy of orbits increases with distance from the nucleus.
5. The number of electrons and protons are equal so that an atom, on the whole, is electrically neutral.
6. There is no change in the energy of electrons as long as they revolve in the same orbit and remain stable. However, if an electron gains energy, it jumps to a higher energy level and if it loses energy, it falls back to the lower energy level.
Structure of potassium: The atomic number of potassium is 19 and its mass the number is 39. It is represented by the symbol [latex] { 19 }^{ 39 }{ K } [/latex] 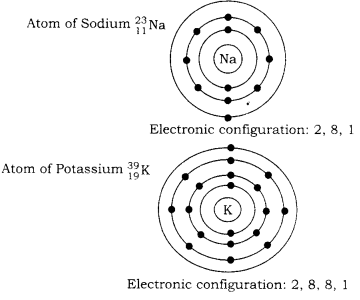 Now, according to rule 4, the filling of N-shell starts and since only one electron is left after filling K, L, M shell it occupies N-shell.

Question 21.
What are positive rays? How are they produced? Write their properties also.
Answer
While working with cathode rays, Sir J.J. Thomson had noticed a red glow around the cathode, on the opposite side of the anode. To know the reason for this glow, he designed a discharge tube with a perforated cathode fixed in the middle of the tube, as shown in the figure.
On applying an electrical potential across the two electrodes, green fluorescence was seen in the glass tube at one end, while on the other end, red fluorescence was seen. The green fluorescence was due to the bombardment of glass by the cathode rays. Obviously, the red fluorescence was due to some other type of rays. J.J. Thomson later showed that these rays causing red fluorescence consisted of positively charged particles and were thus, named as positive or anode rays. These rays were also called canal rays. 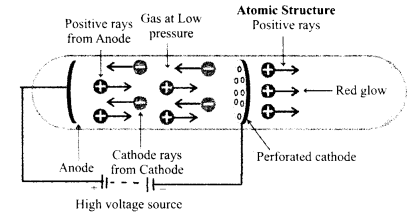 Production of positive rays: Cathode rays consist of negatively charged particles called electrons. These electrons move away from the cathode with very high speeds. These fast-moving electrons split the molecule into atoms, and remove one or more electrons from the atoms. Thus, the atoms get converted into the positive ions due to the loss of electrons. These positive ions pass through the holes in the cathode plate to produce a glow on the glass wall of the discharge tube. A stream of these positively charged particles is called positive rays or anode rays.

Question 2.
An element whose gram-atomic mass and gram-molecular mass are the same is:
(A) hydrogen
(B) oxygen
(C) nitrogen
(D) helium
Answer: D

Question 6.
Which of the following is used as the ‘reference standard’ used at present, for describing the atomic and molecular masses?
(A) Carbon-13
(B) Chlorine-35
(C) Oxygen-8
(D) Carbon-12
Answer: D

Question 8.
The element which can form gases having different atomicity is:
(A) chlorine
(B) oxygen
(C) hydrogen
(D) nitrogen
Answer: D

Question 15.
The presence of the nucleus at the centre of the atom was suggested by:
(A) J.J. Thomson
(B) Rutherford
(C) Goldstein
(D) Bohr
Answer: A

Question 21.
Rutherford’s scattering experiment of resulted in the discovery of:
(A) electron
(B) proton
(C) neutron
(D) nucleus in an atom
Answer: D

Question 1.
Define the term atom.
Answer
An atom is the smallest particle of an element that can take part in a chemical reaction. It may or may not exist independently.

Question 3.
State the law of constant proportion.
Answer
Law of Constant Proportion: In a chemical substance, the elements are always present in a definite proportion by mass.

Question 5.
Define atomicity.
Answer
The number of atoms present in one molecule of an element or a compound is known as its atomicity.

Question 7.
What is molar mass? What are its units?
Answer
The mass of one mole of a substance is called its molar mass. Its unit is gram per mole (g/mol.)

Question 8.
How many moles of CO2 are there is 11g of carbon dioxide? Molar mass of CO2 is 44 g/mol.
Answer

Question 10.
Which two fundamental particles are present inside the nucleus?
Answer
Protons and neutrons.

Question 11.
Which particles were bombarded by Rutherford on a very thin gold foil?
Answer
α-particles.

Question 13.
What is Orbit?
Answer
According to Bohr’s model, the electron in an atom moves around the nucleus in a fixed circular path. This path is called orbit.

Question 4.
If an atom carries one proton and one electron, will it carry ant) next charge or not?
Answer
This atom will not carry any next charge, because the positive charge of a proton will be balanced by the negative charge of the electron.

Question 5.
What is the difference between isobar: and isotopes ? Give one example for each

Question 6.
State the law of conservation of mass. Is this law applicable to the chemical reactions? Elaborate your answer with the help of an example.
Answer
(1) Law of conservation of mass states that mass can neither be created nor destroyed.
(2) Yes, this law is applicable to the chemical reactions. In all chemical reactions, there is an only exchange of reactants taking place when products are formed. There is no loss or gain of mass.
For example: In the following reaction, the total mass of the reactants is equal to the total mass of the products formed.

Question 9.
(a) What is the maximum number of electrons that can be present in the outermost shell of an atom?
(b) Draw a sketch of Bohr’s model of an atom with three shells.
Answer
(a) Eight.

Question 11.
What information do you get from the diagrams given below about the atomic number, mass number, and valency of the atoms X, Y, and Z? Give your answer in a tabular form

Question 1.
Find the % composition of the elements in the following compounds:
(1) Water
(2) Sodium Sulphate
Answer

Question 2.
(1) Define one mole, illustrate its relationship with Avogadro constant,
(2) Calculate the number of moles in:

Answer
(1) One mole of any species (atoms, molecules, ions or particles) is that quantity in number which has a mass equal to its atomic or molecular mass (in grams). The number of particles (atoms), molecules or ions) present in 1 mole of any substance is fixed, with a value of 6.022 x 1023. This number is called Avogadro constant or Avogadro number. 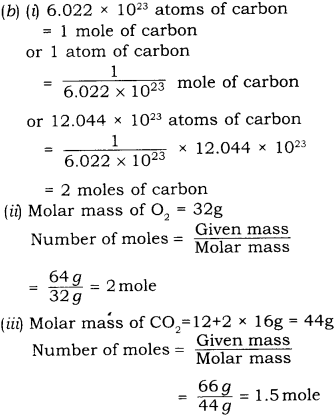 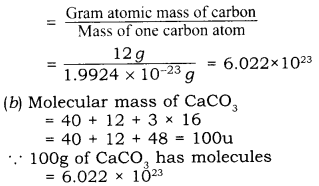 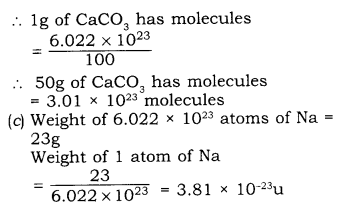 Question 4.
A number of electrons, protons, and neutrons in chemical species A, B, C, and D is given below.