Question 1.
Which economist for the first time used Micro and Macro terms in economics? [1]

Question 4.
In which market form, the number of buyers and sellers are large? [1]

Question 5.
Give any two examples of intermediate goods. [1]

Question 6.
Write the definition of money. [1]

Question 8.
Write the formula to calculate marginal propensity to consume. [1]

Question 9.
What is meant by aggregate demand? [1]

Question 11.
What do you understand by utility? [2]

Question 13.
Clarify the difference between stock and flow. [2]

Question 19.
Mention any four differences between microeconomics and macroeconomics. [4]

Question 20.
Give the meaning of indifference curve. Mention its three features. [4]

Question 21.
Explain the concept of markets demand with the help of demand schedule. [4]

Question 22.
Explain the concepts of average product and marginal product. [4]

Question 23.
Clarify the difference between gross investment and net investment. [4]

Question 25.
Explain the marginal efficiency of capital with the help of diagram. [4]

Question 26.
If the marginal propensity to consume is 0.5, calculate the value of investment multiplier. [4]

Question 27.
Mention any four reasons for the need of international trade. [4]

Question 28.
Explain the three stages of law of variable proportions with the help of diagram. [6]
OR
Explain the concepts of total fixed cost, total variable cost and total cost with help of a schedule.

Answer 2.
Social costs refer to the sacrifices and pains borne by the society during the production. For example-loss to health due to pollution, noise, dust, smoke, etc.

Answer 4.
In a perfect competition market.

Answer 5.
Purchase of thread and rubber by the producer.

Answer 6.
According to Hartley Withers, “Money is that commodity, by which we sell and purchase things”.

Answer 7.
A business class current account holder is provided the facility of obtaining more money than what is deposited in his account for a short time period which is known as overdraft.

Answer 9.
At a given level of income an employment, the sum total of goods and services demanded in an economy in one year is known as aggregate demand.

Answer 10.
That economy in which there is no prohibition on export and import with other countries is known as open economy.

Answer 13.
Difference between Stock and Flow:

Answer 20.
An indifference curve is a graph showing combination of two goods that give the consumer equal satisfaction and utility.
Features

Answer 21.
Market demand table is a tabular representation of the sum total of the quantity of goods demanded by all the consumers at various prices at a particular time period. Following is an example of a market demand table:

Answer 25.
Investment is required in an economy to make increase in employment and to fulfill the increasing requirements. Profit 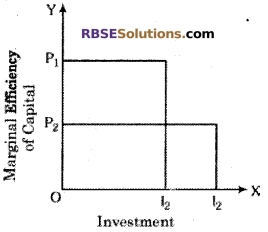 which is derived from the investment of one additional unit of capital is known as the marginal efficiency of capital.

Answer 27.
Need of International Trade: We can understand about the need of international trade with the help of the following points

Interpretation of the Law- According to the law of variable proportions, when the quantity of variable factor is increased while keeping the other factors fixed, then total product, average product and marginal product change at a different rate. This condition has been depicted in the table given below:

The three stages of variable proportions are :
First Stage- In this stage, along with increase in the quantity of variable factor labour, total product, average product and marginal product all three increase continuously. This is the stage of the law of increasing returns. In this stage, due to increase in the quantity of labour, the fixed factors are used in a more effective manner. Due to this, per unit cost declines.

Third Stage- This stage starts from the seventh unit of labour, in which coordination between the factors starts deteriorating and marginal product becomes negative. Total product also starts declining from the eighth unit.
Second stage is the best for production. A producer cannot maximize his profit while remaining in the first and the third stage. He would like to stay at the equilibrium point in the second stage itself. These three stages are clarified with the help of the following diagram. 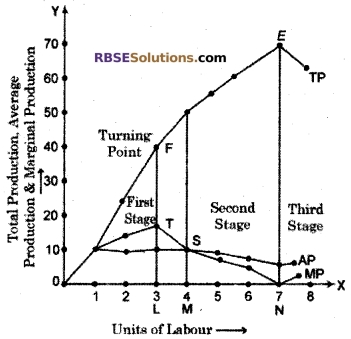 It is clear from the above graph, that average product increase from point O to L. This is the first stage of production. The second stage lasts from L to N and beyond N it is the third stage. No producer would like to remain in the third stage because in this stage, the production starts decreasing in place of increasing. He would like to remain in the second stage itself.

OR
(1) Total Fixed Cost (TFC): In the process of production, expense which is done on fixed factors is known as total fixed cost. Total fixed cost is not related to the quantity of production. This cost remains fixed at all the levels of production. It is related to the size of the plant of the firm, for example- expense done on building, expense done on machinery, insurance, etc. In other words, total fixed cost refers to the difference between total cost and total variable cost.
The following formula is used to calculate this
TFC = AFC x Q
TFC = TC – TVC
This can be clarified through the following table:

(2) Total Variable Cost (TVC): These are those costs, which change along with the quantity of production, i.e. these costs decline along with decline in production and they become zero when the production is zero. These are also known as prime or conversion cost. For example expense done on wages of labourers, raw material, electricity, etc. In other words, total variable cost refers to the difference between total cost and total fixed cost. 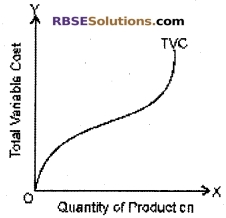 The following formula is used to calculate this
TVC = TC – TFC
TVC = AVC x Q
This can be further clarified with the help of the following table. 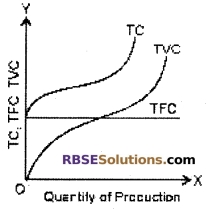 Interpretation of the table- It is clear from the above table that when the price of good X increases, its demand decreases, while the supply of the good increases. In the given table, the units of demand and supply are the same, i.e. 15 units each at equilibrium price 20. Therefore, 20 will be regarded as the equilibrium price. 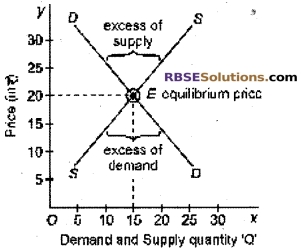 OR
In the diagram, SS is the actual supply curve and DD is the actual demand curve. While looking at the graph, it is clear that when both the demand and supply curve shift on the right then their new equilibrium point is formed at point E, and the new quantity increases to q, while there is no change in price P. Therefore, it can be said that there will be no change in equilibrium 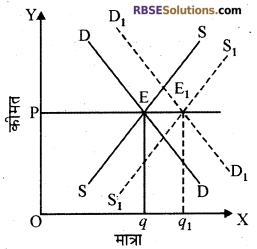 price but the equilibrium quantity will increase if both the demand and the supply curve shift in equal proportion to the right. If this shift of both the curves takes place in unequal proportion, then there will be change in both price as well as in quantity.

Answer 30.
In India, commercial banks refer to such banks which perform all the general banking functions and which are regulated and controlled according to the Banking Regulation Act, 1949. Modern banking developed in Europe and later it spread across the world.
Definition of Bank: There are various definitions about bank. Following are the major ones among them:

Major Definitions given by Economists

On the basis of the above definitions, a simple and brief definition of bank can be given in the following manner:

“Bank is such a financial institution which performs the business of money and credit.”

Functions of Commercial Banks:
(1) Accepting Deposits: A major function of commercial banks is to accept deposits of its customers. Banks accept deposits from the people and arrange sufficient financial resources. Banks provide interest also to their customers on these deposits. In order to attract deposits from people, banks provide them the facility of opening various types of accounts. Following are the major types of accounts which can be opened in a bank:

(3) Agency-related Functions: Banks also work in the form of agents on behalf of their customers. In order to perform these functions, a customer has to direct the bank in written form. Some functions out of these are performed by the banks free of cost, while it charges fee for several other functions. Following are the major works included in this category:

(4) General Utility Functions: Apart from the above mentioned functions, banks also perform several general utility functions, which are as follows:

OR
Central bank is the supreme bank of every country. It regulates currency and credit. Following are the major definitions of central bank: