GENERAL INSTRUCTIONS TO THE EXAMINEES:

(Q.1-9)
Read the passage given below and answer the questions that follow:
Unable to stand his persuasions any more, his mother agreed to see the picture on the last day. They went to the night show. She sat in the women’s class. She had to screw up all her courage to sit down for the picture. She had a feeling of great relief as long as the slide advertisement, and trailer pieces lasted. When the picture began, her heart beat fast. Her husband talking to his wife on the screen, playing with his child, singing, walking, dressing, same clothes, same voice, same anger, same joy-she felt that the whole thing was a piece of cruelty inflicted on her. She shut her eyes several times, but the picture fascinated her; it had the fascination of a thing which is painful. And then came a scene in which he reclined in a chair reading a newspaper. How could he sit absorbed in a newspaper! In their years of married life, how often had she quarreled with him for it! Even on the last day, he had sat thus after dinner, in his canvas chair, with the newspaper before him; she had lost her temper at the sight of it and said, ‘You and your newspaper! I could as well go and sleep of the rest of the day,’ and left his company. When she saw him later, he had fallen back in his chair with the sheets of newspaper over his face…… This was an unbearable scene. À sob burst from her.

Sambu, sitting in his seat on the men’s side, liked to see his father in the newspaper scene because the girl would presently come and ask him what he was reading, annoy him with questions, and get what she deserved; father would shout: ‘Kumari! Will you go out or shall I throw you out!’ That girl didn’t know how to behave with father. And Sambu intensely disliked her…………..

While awaiting eagerly the snubbing of the girl, Sambu heard a burst of sobbing in the women’s class: presently there was a scramble of feet and a cry. “Put the light on! Accident to someone!’ The show was stopped. People went thither. Sambu, cursing this interruption, stood up on a bench to see what the matter was. He saw his mother being lifted from the floor. “That is my mother! Is she also dead?’ screamed Sambu and jumped over the barrier. He wailed and cried. Someone told him, ‘She has only fainted. Nothing has happened to her. Don’t make a fuss. “They carried her out and laid her in the passage. The lights were put out again, people returned to their seats and the show continued. Mother opened her eyes, sat up and said, ‘Let us go away.’

Question 1.
How long did Sambu’s mother feel relieved in the theatre? [1]

Question 2.
Where did Sambu’s mother sit in the cinema hall? [1]

Question 3.
Which show of the picture did Sambu’s mother agree to see? [1]

Question 5.
What did Sambu see when he stood up on the bench? [1]

Question 6.
How did Sambu reach to his fainted mother? Choose from the passage the words that mean: [1]

(Q. 10–11)
Read the passage given below and answer the questions,
Swami Vivekananda was born in aristocratic Bengali Kayastha family of Calcutta on January 12, 1863. Vivekananda’s parents influenced his thinking-his father by his rationality and his mother by her religious temperament. From his childhood, he showed an inclination towards spirituality and God realization. His guru, Ramakrishna, taught him Advaita Vedanta (non-dualism); that all religious are true and that services to man was the most effective worship of God: After the death of his guru, Vivekananda became a wandering monk, touring the Indian subcontinent and acquiring first-hand knowledge of conditions in India.

A spiritual genius of commanding intellect and power, Vivekananda crammed immense labour and achievement into his short life. The youthful Vivekananda embraced the agnostic philosophies of the Western mind along with the worship of science.

At the same time, vehement in his desire to know the truth about God, he questioned people of holy reputation, asking them if they had seen God. He found such a person in Sri Ramakrishna, who became his master, allayed his doubts, gave him God vision, and transformed him into sage and prophet with authority to teach.:

After Sri Ramakrishna’s death, Vivekananda renounced the world and criss-crossed India. His mounting compression for India’s people drove him to seek their material help from the West. Accepting and opportunity to represent Hinduism at Chicago’s Parliament of Religions in 1893, Vivekananda won instant celebrity in America and a ready forum for his spiritual teaching. For three years he spread the Vedanta philosophy and religion in America and England and then returned to India to found the Ramakrishna Math and Mission. Exhorting his nation to spiritual greatness, he wakened India to a new national consciousness. He died July 4, 1902, after a second, much shorter sojoum in the West. His lectures and writings have been gathered into nine volumes.

Question 10.
On the basis of your reading of the above passage, make notes on it using headings and sub headings. [4]

Question 11.
Write a summary of the passage and suggest a suitable title. [2]

Question 12.
Mrs. and Mr. Pareek have received an invitation letter from Mrs. and Mr. K.K. Malpani, Kota to attend the birthday party on their son Lakshya on 21 May 2018 at 8.00 p.m. Write a formal reply accepting the invitation. [4]

Your name is Usha Sharma. Your friend Kavita is organizing a Dance Competition on 26th October 2018. She invited you to act as a judge for the same but you are not able to go there as you have a prior appointment. Respond her informally declining the invitation. [4]

Question 13.
You are Anupama, reporter of Dainik Jagran Patrika. Write a report in 100 words on a Bank Robbery that took place in Barmer. [7]

Write a factual description in about 100 words on “Consuming Fresh Food Instead of Canned Food”. [7]

Question 14.
Write an application to the Secretary, Board of Secondary, Education, Rajasthan, Ajmer for making correction in the date of birth in your secondary certificate. State what documents you are sending with it. [7]

You are Ranjeet Singh 52/7, Todawata Colony, Khatipura. Write an application to the Director, Tilak Senior Secondary School Tilak Nagar, Jaipur for the post of a clerk. Say that you have read the advertisement in the Northern India Patrika. [7]

Question 15.
You are Raina/Ranjeet of class XII. You read a topic your duty as citizen of India in a book. Write a speech in 100 words on ‘My Duty as a Citizen of India’. [7]

Write an article on the harmful effects of polythene bags on cattle in about 100 words on the basis of given visual. [7] 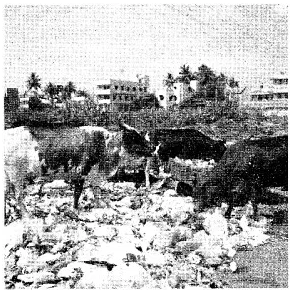 (Q. 16-17)
Read the extract given below and answer the questions that follow:
Then a soldier,
Full of strange oaths, and bearded like the pard,
Jealous in honor, sudden and quick in quarrel,
Seeking the bubble reputation
Even in the cannon’s mouth.

Hope is given different names;
Some call it expectation,
Others term it future relevance
Some others think it a measure of benefaction
To me Hope is the creation of Soul
That makes us feel pleasure some
And leap with enthusiasm and glow

Question 16.
What are the various names given to hope? What does hope mean to the poet? [2]

Question 17.
How does hope make us feel? Why we leap with enthusiasm when we have hope? [2]

Question 18.
Answer any three of the following questions in 30-40 words each.

Question 20.
Why did the narrator feel so delighted and proud after selling the painting? (Third Thoughts)

Question 21.
What does the author mean by the expression “Garbage to them is gold”? (Lost Spring)

Question 22.
Where did the narrator eat a nice meal one evening and how did he feel after eating? (A Walk Through Fire)

Question 23.
Answer the questions in about 125 words:
How does the yoga posture enhance the circulation of blood and body fluids? Support your answer from the text. (How Yoga Heals) [7]

Why does the writer say that the study of the nature and properties of water still have plenty of scope for scientific research? (Water). [7]

Question 24.
Answer the following questions in about 125 words: How was the hundredth tiger found and killed? (The Tiger King) [7]

How did Najab fall in love with Fatimah? (Love Across the Salt Desert) Answer the following [7]

Question 26.
Why was there so much scarcity of water in the village? (Drought)

Question 27.
How did the girl react to the reply of the passers-by? (The Guitar Player)

Question 28.
What made the peddler think that he had indeed fallen into a rattrap? (The Rattrap)