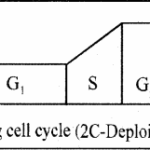 Question 2.
Bacterium cell divides by-
(a) Amitosis
(b) Mitosis
(c) Meiosis
(d) None

Question 3.
In which phase of cell division, synapsis can be seen-
(a) Pachytene
(b) Zygotene
(c) Diplotene
(d) Diakinesis

Question 4.
Cell division in which chromosome number is reduced to half-
(a) Meiosis
(b) Mitosis
(c) Amitosis
(d) All

Question 3.
What is synapsis ?
Answer:
The pairing of homologous chromosomes during zygotene subphase of meiosis.

Question 4.
What is chiasma ?
Answer:
The point of exhcnage of genetic material between homologous chromosomes.

Question 1.
Describe in brief the amitosis.
Answer:
This is a simplest cell division. It takes place in prokaryotes eg Bacteria and some lower plants eg algae, fungi etc. In this division, the nucleus elongates to become dumble shaped and finally divides into two. Simultaneously, the cytoplasm also divides into 2 and there is formation of 2 daughter cell. The genetic material is approximately divided in this division.

Question 2.
Give the importance of mitosis.
Answer:
Significance of Mitosis

Question 3.
Why meiosis is essential in living organisms.
Answer:

Question 1.
What do you mean by cell cycle ? Describe cell cycle with help of diagram.
Answer:
The cell cycle is an orderly sequence of events by which a growing cell duplicates its contents and divides into two. In other word, the life cycle of any specific cell is called as cell cycle It was first described by Howard and Pelc (1953). The cell cycle is a complex and cyclic process of eukaryotic cells. It includes cell growth, duplication of genome, nuclear division & cytoplasmic division. The cell cycle of a somatic cell consists of two phases viz. –
(A) Interphase and
(B) Mitotic phase (M-phase)

Interphase:
It is the metabolically active phase that is further divisible into 3 phases viz. -G1 phase, S-phase & G2 phase. 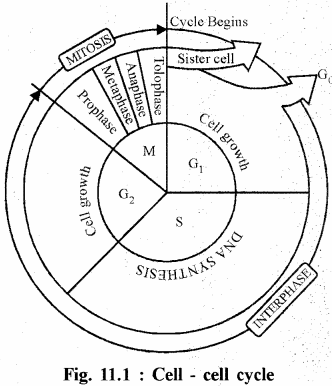 Question 2.
Explain various phases of mitosis
Answer:
[Gr. Mitos = Wrap thread]
This is the most common type of cell division that occurs both in somatic and germ cells. It results in the formation of two equal daughter cells in which the chromosomes number remains unchanged. The term “mitosis” was coined by Walther Flemming (1882).

The mitosis can be studied as follows-
(A) Karyokinesis:
It involves division of the nucleus. It is further divided into four phases –

Question 3.
Describe the various phases of prophase – I of meiosis. Give diagrams.
Answer:
The meiosis is a special cell division that takes place in deploid primary spermatocytes, primary oocytes and zygotes of thallophytes. It results in the formation of haploid gametes. The number of chromosomes in the gametes is half of the parent cell. The meiosis involves double division.
I. Meiosis – I
It is also called as reductional division. It results in half number of chromosomes. It completes in two phases viz-
(A) Karyokinesis
(B) Cytokinesis.

(A) Karyokinesis:
It divides the nuclear substances and involves following four phases viz –
(a) Prophase – I:
It is the longest phase of the meiosis. It is a complex phase and it is further divided into four subphases :

(b) Metaphase – I: The spindle figres get attached to the homologous chromosomes. These homologous pairs get arranged at the equitorial plate or metaphasic plate. The centromeres remain towards the poles and the arms remain at the metaphasic plate.
(c) Anaphase – I : The homologous chromosomes move apart and form daughter chromosomes. The daughter chromosomes begin to move and finally reach to the respective poles. Hence, every pole receives half number of chromosomes.
(d) Telophase – I : Disappearance of the asters and the spindle fibres. Reappearance of the nuclear membrane and nucleolous. Elongation of the chromosomes due to despiralization.

(B) Cytokinesis – I
It results in the formation of two haploid daughter cells. It’s process is similar to the mitosis cytokinesis.

II. Meiosis – II
It is also called as equational division. It is almost similar to the mitosis. The interphase – II is normally absent as all the required preparation takes place in interphase – I.
(A) Karyokinesin – II 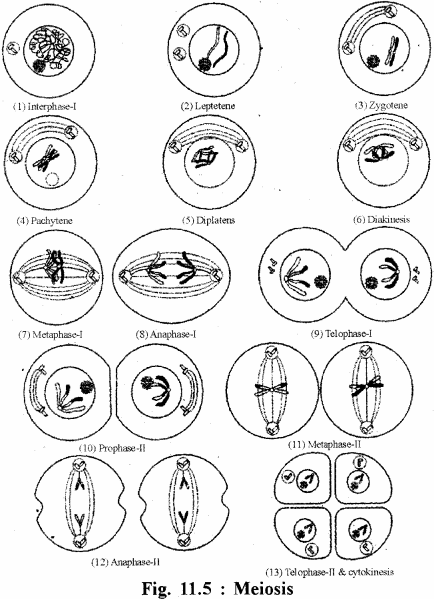