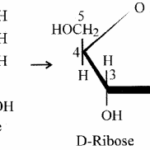 Question 1.
Where DNA is found in organisms ?
Answer:
Nucleus.

Question 4.
Which nitrogen base is found in RNA in place of thymine.
Answer:
Uracil.

Question 5.
What is recon ?
Answer:
Unit of recombinations in gene.

Question 6.
What is triplet codon ?
Answer:
A sequence of three nucleotides that code one amino acid.

Question 8.
Which is the initiation codon in protein synthesis.
Answer:
AUG.

Question 1.
Write the chemical composition of DNA.
Answer:
DNA is made up of three types of compounds viz. –
(A) Phosphoric acid
(B) Pentose sugar
(C) Nitrogen bases

(A) Phosphoric acid (H3po4)
It occupies the peripheral region of the DNA molecule. It is attached to the 5th carbon of sugar molecule of its own nucleotide in the form of phosphate group. It get attached to the 3rd carbon of the sugar of adjacent nucleotide. It is called as phosphodiester bond.

(B) Pentose Sugar:
It is deoxyribose type in DNA. Which has one oxygen atom less at carbon number 2. The first and fourth carbon atoms unite with a oxygen to form a ring. 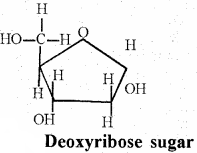 One molecule of nitrogen base (A or T or C or G) and one molecule of deoxyribose pentose sugar (dS) unite to form a nucleoside which is a subunit of DNA. The nucleosides are of 4 types viz. –

One molecule of phosphoric acid (P), one molecule of deoxyribose pentose sugar and one molecule of nitrogen base (A or G or C o T) unite to form nucteotide which is a structural unit of DNA. The nucleotides are of four types viz. –

Question 3.
Define gene.
Answer:
The gene is a smallest unit of genetics. The term gene was coined by Johanson (1909). The gene is a linear sequence of nucleotides in DNA that determines the heredity of a specific character. The genes store and express the genetic informations that will contribute towards the phenotype, and will be passed on to the successive generations. Each gene occupies a special position in a chromosome which is termed as locus.

Structure of Gene:
Seymor Benzer (1955) subdivided gene into different units such as-

Question 4.
What are complementary genes. .
Answer:
One of two or more genes that when present together produce effects qualitatively different from the separate effect of any one of them.

Triplet Genetic Code:
Crick, Brenner et al. first demostrated that codons consist of three bases. Marshall Nirenberg and Heinrich J. Mathaei (1961) where the first to reveal the nature of a codon. According to triplet codon concept, three nucleotides (base) code one amino acid. It gives 64 genetic codes [4 x 4 x 4 = 64] which are more than enough to code 20 amino acids.

Holley, Khorana & Nirenberg studied all the 64 genetic codes, for this work they were awarded Nobel prize of 1968 in medicine/physiology. Nirenberg worked with Leder & determined 54 codons but Leder was not given the Noble prize. 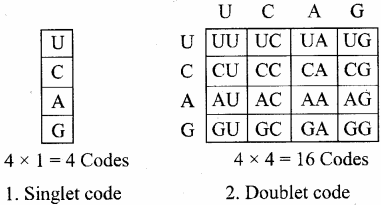 Question 7.
Give an account of polymerases found in eukaryotes.
Answer:
RNA polymerase catalyses the synthesis of different types of RNA from the DNA.
(a) Prokaryotes contain only one type of RNA polymerase. Each molecule of this RNA polymerase has a core part containing 4 polypeptide chains (2a chains, one P chain & one pi chain) and a attached s(sigma) chain or a factor. The a factor is attached loosely to the core enzyme.

(b) In eukaryotes, the nucleus has three types of RNA polymerases (R. Roeder and W.Rutter, 1969) viz.-

Question 1.
Explain that DNA is a hereditary material.
Answer:
Scientists dealing in molecular biology proved with the help of experiments that DNA is a hereditory material. There are two main evidences viz –
(A) Griffith’s experiment:
It was done in 1928 by Frederick Griffith. It was one of the experiment showing that bacteria can get DNA through a process called transformation. He used two strains of bacteria, called Diplococcus pheumonae viz. – type II-R (rough or non virulent) and type III – S (Smooth or virulent). These bacteria infect rats & human beings.

In this experiment, the bacteria of strain III – S were killed by heat and their remains were added to strain II-R bacteria. The killed strain III-S and strain II-R harmed the mice but the blend of the two was able to kill mice. Griffith was also able to get both live II-R and III- S strains from the blood of these dead mice. He concluded that the type II-R had been transformed into the lethal III- S strain by transforming principle. Griffith observed-

Hence, it can be concluded that DNA is the hereditory material. 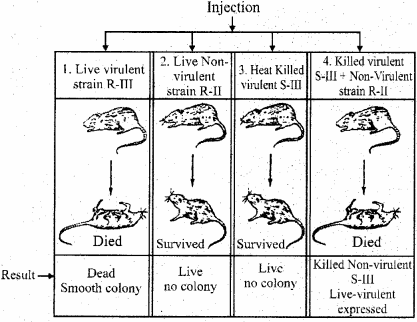 Lateron, the experiments done by Avery, McLeod and McCarty (1944) further proved that DNA is a hereditory materila.
They found that trypsin, chymotrypsin and ribonuclease (ezymes that break proteins & RNA) did not affect it, but an enzyme DNAase destroyed the transformation power.
This proves that, it was DNA rather than RNA, protein or other cell components that was responsible for transformation.

(B) Hershey-Chase Experiments:
A. Hershey and M.Chase conducted a series of experiments in 1952 that helped to confirm that DNA is genetic material.
Hershey and chase showed that when bacteriophages which were composed of DNA and protein, infect bacteria, their DNA enters the host bacterial cell not the other components.

They used radioactive phosphorus (P32) and sulphur (S35) in their experiments separately. Some of the bacteriophages were cultured in medium having P32 and some were cultured in medium having S35. They found that P32 labelled DNA and S35labeled proteins, i.e. in the bacteriophages DNA was labelled with P32, the proteins were normal and in which proteins were labeled with S35, the DNA was normal.

Question 2.
Describe Watson & Crick model of DNA.
Answer:
structur of DNA:
DNA is found in all the plants, animals, prokaryotes, DNA viruses (most animal viruses) and bacteriophages. In plants & animals, DNA binds with basic proteins to form nucleoproteins.
Most of the DNA is found in the nucleus but little DNA is also found in mitochondria and chloroplasts. Normally, the DNA is double stranded (ds DNA), but in bacteriophages like Φ X 174, M 13 coliphage etc., the DNA is single stranded (SS DNA). Two British bio-chemists, J.D. Watson and F.H.C.
Crick (1953) propounded double helical structure of DNA. They also prepared a model of DNA. For this discovery, they were awarded Nobel prize of 1962. According to it, the structure to DNA is as follows- 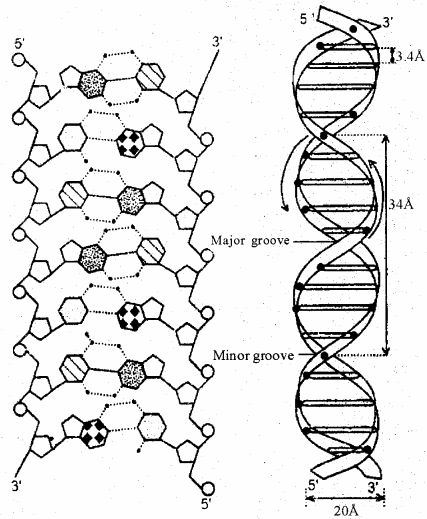 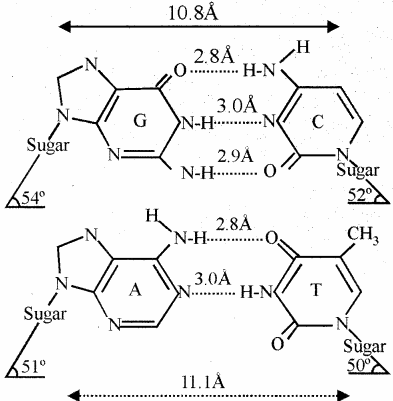 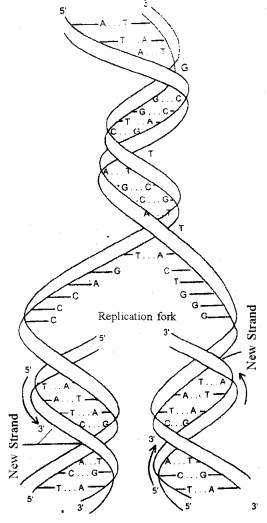 Some of the main enzymes are as follows-
(i) DNA helicase – It separates the two strands of the DNA molecule. It binds at the replication fork. It is also called as unwinding enzyme.
(ii) Restriction endonuclease – It cuts the DNA molecule at or near specific recognition nucleotide sequences known as restriction sites. It is also called as molecule scissors or DNA knife or molecular scalpel.
(iii) DNA polymerase I and III – They help in the formation of polynucleotide chain. Polymerase-I was discovered by Arthur Korenberg (1955) and polymerase-III was discovered by Thomas Korenberg (son of Aurther Korenberg) and Gefter (1970). Polymerase-III also separates RNA primer from the DNA after replication.
(iv) DNA Ligase – It joins the Okazaki fragment to form complete chain. In circular DNA, it links the two ends of the DNA chain.
(v) DNA gyrase – It increases twisting in DNA molecule & form compact structure. 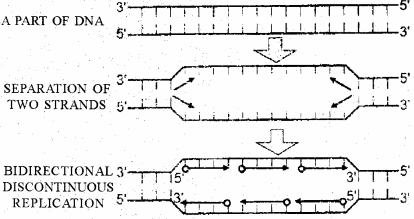 In addition DBP (DNA Binding Proteins) which interact with major groove of B-DNA. They have DNA domains like
zinc finger, leucine zipper etc. 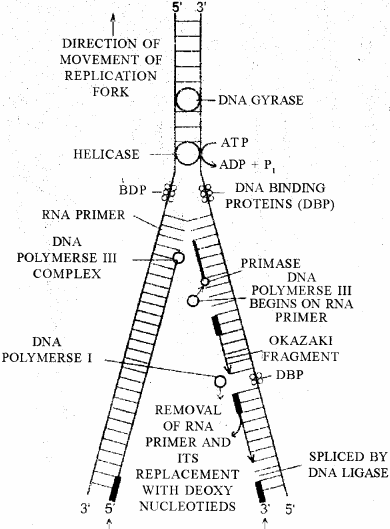 Structure of RNA:
It consists of one polynucleotide chain which bends in the middle twists on it self to form single helix. A molecule of RNA consists of both helical (coiled) and non-helical (uncoiled) parts. RNA can be single stranded (SS) or double stranded (dS). In RNA, the base ratio is never one i.e

(B) Non-genetic RNA
It is found in those organisms where DNA acts as hereditory material. In these organism, RNA primarily participate in protein synthesis. The non – genetical RNA is of three types-
(i) Messenger RNA (mRNA) – it is a large family of RNA molecules. It brings information of protein synthesis from DNA to the cytoplasm. In mRNA, this information is coded in the form of sequence of nucleotides (genetic code). 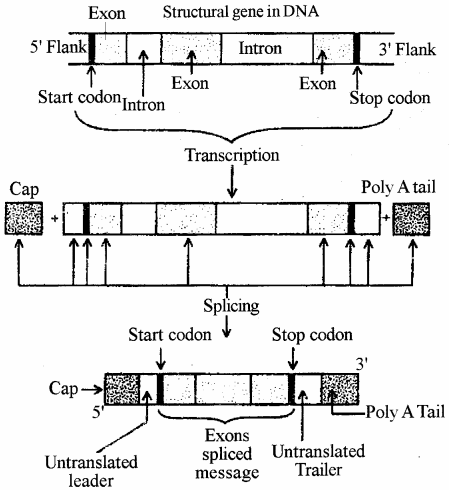 (ii) Ribosonial RNA (rRNA) – It is found in the ribosomes. It is the maximum among all the three RNA (about 80% of total RNA) and it is of 6 types. It is a stable RNA i.e. it’s life span is more. It reads the message coded in the mRNA at the time of protein synthesis, catalyze the assembly of amino acids into protein chains and they also bind t RNAs.

(iii) Transfer RNA (tRNA) – It is also called as soluble RNA (sRNA). It is found freely in the cytoplasm. They are of 60 types. They are small and have 75 to 80 nucleotides. The structure of tRNA can be explained with the help of Clover leaf model which was propounded by Robert Holley (1965). For this discovry, Holley was awarded Nobel prize of 1968 along with Khorana & Nirenbery. 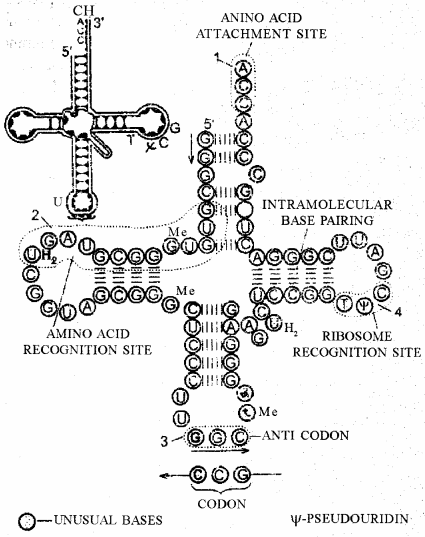 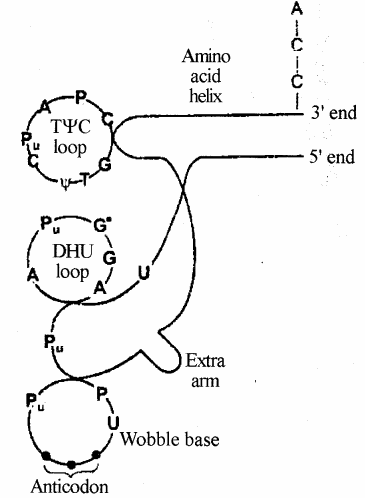 Triplet Genetic Code:
Crick, Brenner et al. first demostrated that codons consist of three bases. Marshall Nirenberg and Heinrich J. Mathaei (1961) where the first to reveal the nature of a codon. According to triplet codon concept, three nucleotides (base) code one amino acid. It gives 64 genetic codes [4 x 4 x 4 = 64] which are more than enough to code 20 amino acids.

Holley, Khorana & Nirenberg studied all the 64 genetic codes, for this work they were awarded Nobel prize of 1968 in medicine/physiology. Nirenberg worked with Leder & determined 54 codons but Leder was not given the Noble prize 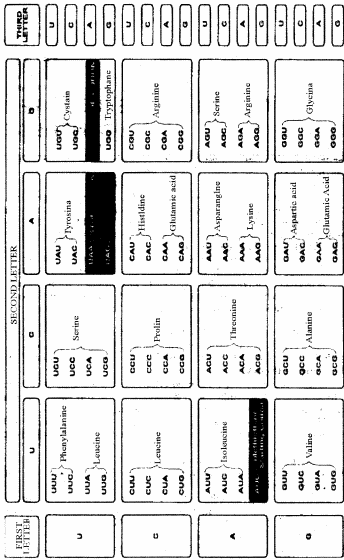 Question 7.
Explain translation in protein synthesis.
Answer:
Process of Translation
The process in which sequence of nucleotides in mRNA is translated into the sequence of amino acids of a polypeptide chain is called as translation. It involves three steps viz- initiation, elongation & termination.
(A) Initiation
Initiation of polypeptide chain begins with the codon AUG The codon AUG stands for methionine, hence, the formation of polypeptide begins with methionine amino acid.

(B) Elongation:
The elongation of the polypeptide chain begins after the formation of 70S mRNA f.met-tRNAfmet complex. The ribosomes translate an mRNA in the 5′ → 3′ direction. Hence, the protein or polypeptide grows in the amino (N) to carboxyl

Next, the first peptide bond is formed, an enzyme peptidyl transferase (found in the larger subunit) transfer the f. methionine from its tRNAfinet in the P- site to the aminoacyl – tRNA in the A – site. This assembly is called as dipeptidyl – tRNA. The tRNA at P- site is said to be decylated. In the next step, the deacylated tRNA in the P- site leaves the ribosome. The dipeptidyl – tRNA in the A-site moves into the P- site of the larger sub – unit. This process is called as translocation and it requires GTP & c factor called EF- G. No the ribosome shifts along mRNA in 5′ ® 3′ direction, so that the next codon on mRNA is available at A- site. The process then repeats to add another amino acid.

As one ribosome moves along the length of mRNA, the initiation point on mRNA becomes free which can form initiation complex with another ribosome. In this way, 3 to 5 ribosomes get attached to a single mRNA molecule, each with a polypeptide chain under formation.

Modification of released polypetide:
The just release polypeptide is linear and has primary structure. The formyl group from the first amino acid is removed by an enzyme deformylase. It may lose some amino acids either from N-terminal or C-terminal or from both terminals with the help of exopentidase enzyme. The reamining polypeptide may gets coiled or folded to from secondary or tertiary structure. 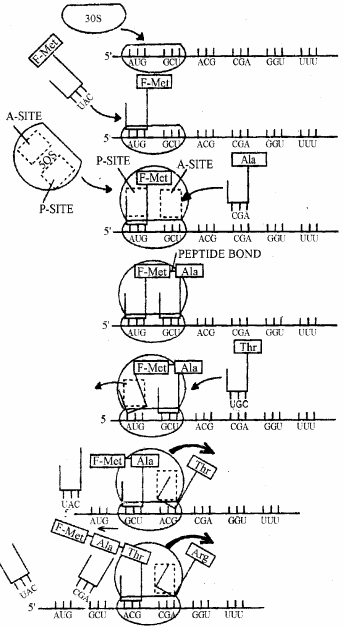