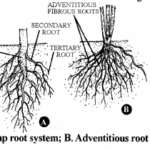 Question 2.
The root arises from other then radicle is called which root
(a) Tap root
(b) Fibrous root
(c) Lateral root
(d) Adventitious root

Question 4.
The shape of root of carrot is
(a) Conical
(b) Tuberous
(c) Napiform
(d) Fusiform

Question 6.
Out of the following which plant part cannot be considered as root
(a) Radish
(b) Colocassia
(c) Sweet potato
(d) Dahelia

Question 8.
In maize, roots are developed from-
(a) from nodes of stem
(b) from leaves
(c) Inflorescence
(d) shoot apex

Questions 1.
How many types of root are there? Write the names of them.
Answer:
Types of Roots: On the basis of their origin, roots are of two types – tap root and adventitious root.
(a) Tap root:
On germination of a seed, the radicle elongates into primary root or true root or tap root. In dicot plants, the tap root is persistent and produces lateral roots such as secondary roots, tertiary roots etc. All lateral roots arise in acropetal succession i.e. younger roots towards apex and older roots towards base. The tap root and its branches constitute the tap root system.

(B) The Secondary Functions of root are:

Question 1.
Write in detail how the roots are modified as mechanical tissue with help of well labelled diagram?
Answer:
modified as mechanical tissue:
1. Prop Roots:
In some tropical trees like Ficus bengahtensis (banyan), the horizontal aerial branches give rise to aerial roots which are provided with root-caps and hang vertically down from the boughs like so many strings. These grow down and, on reaching the soil and becoming anchored, they begin to stouten and ultimate become almost as strong as the main trunk. They support or prop up the horizontal branches like so many pillars.

Ultimately, the main trunk may die when the prop roots fully replace it. Long living banyan trees cover large areas by their spreading branches supported on prop roots. The banyan tree at the Indian Botanical Garden, Shibpur, Calcutta is about 200 years old, covers a large area and has produced more than 900 prop roots. A similar tree in the Theosophical Society compound Adyar, Madras and another in the Buitenzorg Botanical Garden, Java, are equally remarkable.

2. Stilt Roots:
Certain shrubs and small trees like screw-pine (Pandanus foetidus) grow on the edges of tanks, marshes, etc., where the anchorage is not very strong. In these cases, short roots grow obliquely downwards from near the base of the stem and act like stilts providing additional support as well as anchorage to the stem. The adventitious roots growing from the lower nodes of maize plants act in a similar way. Such stilt roots are also seen in mangrove plants like Rhizophora. 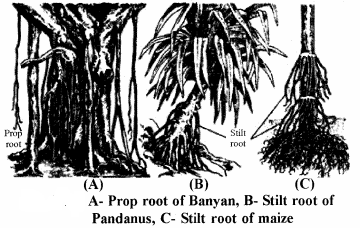 3. Root Buttresses:
In some large trees, instead of stilt roots, there are great plank-like roots radiating from the base of the tree like wings These are called buttresses and are actually partly root and partly stem They may be seen in old trees of Bombax ceiba, Terminalia catappa, Ficus sp., etc. 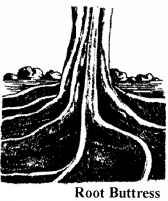 4. Climbing Roots:
Some climbers can climb up their supports as adventitious roots growing from the nodes of the frail climber twine round and clasp the support as if the climber has been tied to the support at those points. Common examples are to be found in the aroid Scindapsus officinalis, the betel vine etc. 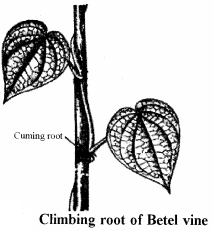 5. Clinging Roots:
Epiphvtes like orchids cling to their support by means of special clinging roots which enter the crevices of the support and fix the epiphvtc Clinging roots may carry on some absorption but are different from the specialised aerial absorbing roots. 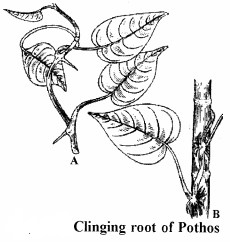 6. Haptera or Holdfasts:
The thalloid branching root of Podostemaceae , which is their main plant body carrying on assimilation as well as reproduction, is stuck up to the rock by means of special root processes which may be called holdfasts or haptera as in some algae. The adhesive discs of adhesive climbers like Ficus repens and Ivy are also types of hold fasts. It may be noted that all the three types of roots, climbing, clinging and hold-fasts, may behave in the same way by becoming flattened and disc – like and sticking to their supports or to the substratum.

7. Contractile or Pull Roots:
In plants with underground stems (rhizome, bulb, tuber, corm), there are certain roots which are different from the others as they are found to contract or swell so that the aerial shoot or the underground parts arc kept at a proper level in the soil. These roots are, therefore, called pull or contractile roots. Those may be seen in Canna, Crocus, Allium, Lilium, etc.

8. Floating Roots:
Certain aquatic floating plants like fussiaea repens (Onagraceae) have special roots growing from the nodes in addition to the ordinary adventitious roots. These roots look like masses of white cotton and are extremely spongy in nature. Their buoyancy helps to keep the plant floating. If taken out of water they dry and shrivel up quickly. The large amount of air contained in the floating roots may also be of some use in the aeration (‘breathing’) of the submerged organs. 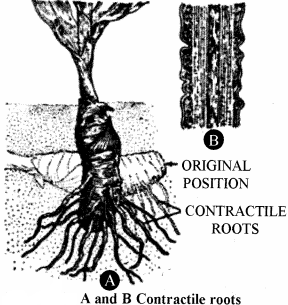 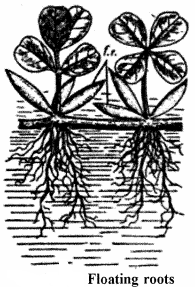 9. Root – Thorns:
In many palms (e.g., Acanthorhiza and Iriartea), some aroids (Pothos armatus) and others, adventitious roots from the base of the stem become hard pointed and thron – like. These are called root – thorns. A They are of indirect help as an Armature to the plants in driving out marauding animals. Old adventitious roots of coconut, etc., also serve the same purpose.

Modifications of Adventitious Root:
1. Roots modified for storage of food:

Question 3.
Explain the different zones of root apex with help of well labelled diagram?
Answer:
A typical root can be differentiated into five regions. From apex to base they are:

(b)  Growing point or Meristematic Zone: