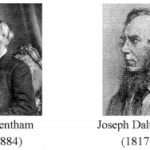 Question 1.
What is the smallest unit of plant taxonomy?
(a) Intra specific group
(b) Species
(c) Genus
(d) Family

Question 2.
Who is the father of taxonomy?
(a) Takhtajan
(b) Linneus
(c) Bentham and Hooker
(d) Theophrastus

Question 4.
Who proposed natural system of classification of plants?
(a) Hutchinson
(b) Engler and Prantl
(c) Bentham and Hooker
(d) John Ray

Question 3.
What is full form of ICBN?
Answer :
International Code of Botanical Nomenclature

Question 4.
Define taxonomy?
Answer :
According to G.H.M. Lawrence (1951) plant taxonomy is branch of science which deals with identification, nomenclature and classification of plants.

Question 5.
Which two names are considered for writing botanical name of a plant?
Answer :
First name is generic name while second name is specific name.

Question 6.
Which language is used to write botanical names of plants?
Answer :
Latin

Question 1.
Define species.
Answer :
Species is a group of individual plants which are morphologically as well a genetically same and can freely interbreed with each other in nature to maintain the continuity of life.

Question 5.
Explain characteristics of different taxons of Bentham and Hooker’s classification.
Answer :
Class I : Dicotyledonae:
• Main characters of this class are:

Class II : Monocotyledonae:
• This group includes angiosperms in which the seed bears only one cotyledon.

Question 7.
How Cruciferae family defined and explained in ancient text ‘Vrikshayurveda’?
Answer :
It was explained in trees, shrubs and herbs and their uses.

Scientific Name of a Plant should be Written in Latin Language

Question 3.
Explain concept of Genus and species with examples.
Answer :
Concepts of Species :

Some Popular Definition of Species :

The Concept of the Genus :

All type of classifications can be categories in three type
of category as follows:

Question 2.
What is name of book wrote by A.P. de Candolle?
Answer :
‘Theory of Elementary Botany’.

Question 3.
Who is known as father of botany?
Answer :
Theophrastus.

Question 4.
Name the book in which Bentham and Hooker gave their classification.
Answer :
Genera Plantarum

Question 5.
Define Polypetalae.
Answer :
It is subclass of dicotyledons having calyx and corolla. In the corolla petals are free.