Question 2.
Which of the following cannot be synthesised by Stephen’s reaction?
(a) CH3CHO
(b) CH3CH2CHO
(c) C6H5CHO
(d) CH3COCH3

Question 3.
Which isomerism is shown by pentanone?
(a) Chain isomerism
(b) Position isomerism
(c) Functional isomerism
(d) All of these

Question 4.
Which of the following is used for the reduction of aldehydes and ketones in Clemmenson’s reduction?
(a) Zinc Amalgam and conc. HCl
(b) Red P and HI
(c) LiAlH4
(d) Sodium ethoxide

Question 5.
The reduction of acetone by Mg-Hg gives:
(a) Aldol
(b) Propane
(c) Pinacol
(d) Propanol

Question 6.
Aldehyde and ketones do not react with
(a) Sodium bisulphide
(b) Phenylhydrazine
(c) Dihydrogen sodium phosphate
(d) Semicarbazide

Question 10.
Which of the following method is used for conversion of the ketone to hydrocarbon?
(a) Aldo condensation
(b) Wolf-Kishner Reduction
(c) Cannizzaro’s Reaction
(d) Clemmenson Reduction

Question 3.
What is the significance of Oppenaur oxidation?
Answer:
Secondary alcohol can also be oxidised to ketones by this method.

Among them, the nucleophilic addition reaction is the important reactions of carbonyl compounds.

Question 1.
Write the name of the product obtained by ozonolysis of ethene and write equation also.
Answer: (ii) Rosenmund’s reduction:
Aliphatic as well as’ aromatic aldehydes can be prepared by the reduction of acid chlorides with H2 in the presence of palladium (Pd) deposited over barium sulphate along with a small amount of sulphur or quinoline. This mixture is called Lindlar’s catalyst, Both sulphur and quinoline poison palladium and check its ability to reduce aldehyde into alcohol. This reaction is called Rosenmund’s reduction.

Question 5.
What is Meerwein Ponndrof Verley reduction? Explain.
Answer:
Meerwein – Ponndrof – Verley (MPV) reduction in organic chemistry is the reduction of aldehydes and ketones to their corresponding alcohol utilizing aluminium alkoxide catalyst in the presence of sacrificial alcohol, The beauty of the MPV reduction lies in its high chemoselectivity and its use of a cheap environmentally friendly metal catalyst.

Two resonance structures A and B can be written for delocalization of ion. Both structures contribute to the hybrid, Although structure A is favoured by the strength of its carbon-oxygen bond relative to the weaker carbon-carbon bond of B. Structure B makes a greater contribution to the hybrid because oxygen, being electronegative is better able to accommodate the negative charge. We can depict the enolate hybrid in the following way.

When this resonance stabilized enolate accepts a proton it can do so in either of two ways:

Question 7.
Explain the commercial importance of formaldehyde and acetaldehyde.
Answer:
(i) Formaldehyde:

Question 8.
Write the method of preparation of pinacol from ketone.
Answer:
When ketone is heated with magnesium amalgam and reduced with water, pinacols are obtained.

Question 9.
The acidity of formic acid is more than acetic acid. Explain.
Answer:
Due to the +I effect of the alkyl group the electron density on the oxygen atom increases and its electron accepting nature in the OH bond decreases accordingly. The release of H+ ion becomes difficult. Thus, greater the magnitude of +I effect weaker will be the acid.
order of +I effect: H > CH3
Therefore, formic acid (HCOOH) is more acidic than acetic acid (CH3COOH).

Question 2.
Which methods are used for the preparation of both aldehydes and ketones? Give the chemical equation for all.
Answer:
(i) Preparation of Aldehyde
1. From the reduction of alkyl nitrile (Stephen Reduction):
When the solution of alkyl nitrile in ether is reduced with stannous chloride in the presence of hydrochloric acid at room temperature then Imine hydrochloride precipitated, which on hydrolysis with hot water gives aldehyde.

This reaction is called Stephen Reduction.

This reaction is called Rosenmund’s reduction. Formaldehyde cannot be prepared by this method because HCOCl is unstable at room temperature. Generally, aldehydes on further reduction give primary alcohols but here BaSO4 and sulphur or quinoline act as catalytic poison for Pd catalyst and prevent the reduction of aldehyde to alcohol.

(ii) Methods for Preparation of Ketones
1. From acid chlorides or Acyl Chlorides:
The ketones are easily prepared by reaction of suitable dialkyl cadmium with acid chlorides.

In this reaction, the Grignard reagent cannot be used directly because it is more reactive than dialkyl cadmium and converts the ketone produced in reaction into tertiary alcohols.

2. From Nitriles:
Ketones can be easily prepared by the reaction of the Grignard reagent with suitable alkyl nitrile. 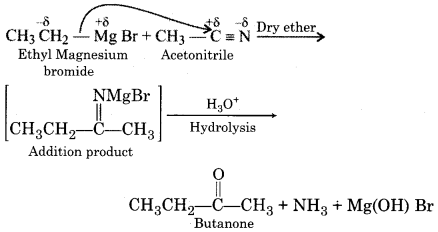 In the above reaction, if hydrocyanic acid is used in place of alkyl nitrile then aldehydes are formed. 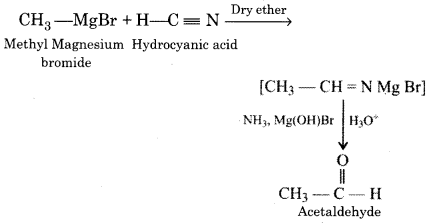 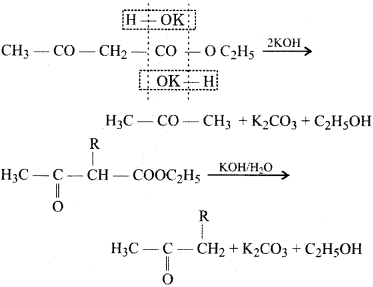 Mechanism of Nucleophilic Addition Reactions:
The reason for the activity of aldehyde and ketone is due to the presence of polar >C=O bond in them. As oxygen is more electronegative hence it attracts electron density towards it therefore partial negative charge develops on it, on the other hand, partial positive charge develops on a carbon atom.

The hybridisation of carbon changes from sp2 to sp3 in this process a tetrahedral alkoxide intermediate is formed. This intermediate capture a proton from the reaction medium to give the electrically neutral product. The net result is the addition of Nu– and H+ across the carbon-oxygen double bond. This reaction is named as nucleophilic addition reaction due to an attack of nucleophile in the slow step of the reaction.

(a) By the reduction of carbonyl compounds:
The reduction can be carried with either H2 in the presence of Ni or Pt or with LiAlH4 dissolved in anhydrous ether. Aldehydes upon reduction form primary alcohols. 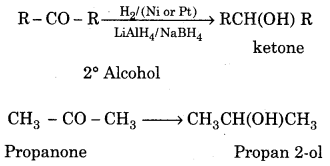 2. All other aldehydes from a secondary alcohol. 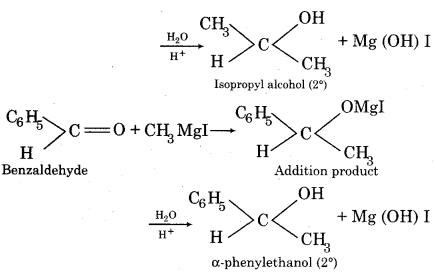 (c) By the reduction of alkyl lithium on carbonyl compounds
Alkyl lithiums are organometallic compounds and are formed by the action of haloalkane with lithium using ether as the solvent.

Alkyl lithium reacts with carbonyl compounds in the same way as Grignard reagents and forms alcohols. 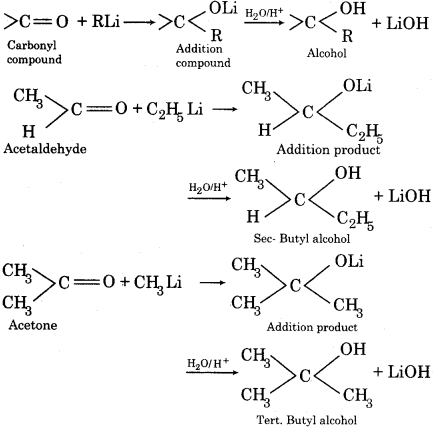 Ketones do not react with monohydric alcohol but form cycle ketals with ethylene glycol as follows:

3. Reduction of Tollen’s Reagent:
Tollen’s reagent is an ammoniacal solution of silver nitrate and is prepared by adding an aqueous solution of NH4OH to that of AgNO3 till the precipitate of AgOH initially formed just redissolves. Upon heating an aldehyde with Tollen’s reagent the latter is reduced to metallic silver which gets deposited on the inner walls of the test tube and shines like a mirror. This reaction is often called the silver mirror test.

4. Baeyer Villinger oxidation:
In this oxidation reaction, a ketone is reacted with a suitable peracid to form an ester as the product along with carboxylic acid. For example:

5. Cannizaro’s Reaction:
Aldehydes which have no α – hydrogen atom when heated with NaOH or KOH undergo Cannizaro’s reaction. In this reaction, two molecules of aldehydes undergo self oxidation and reduction to form a mixture of alcohol and salt of carboxylic acid.
For example: 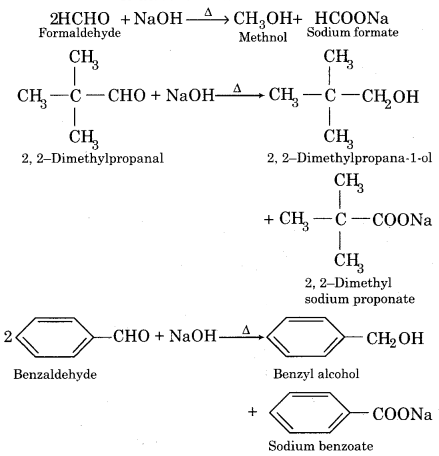 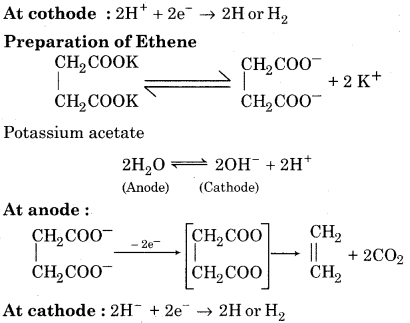 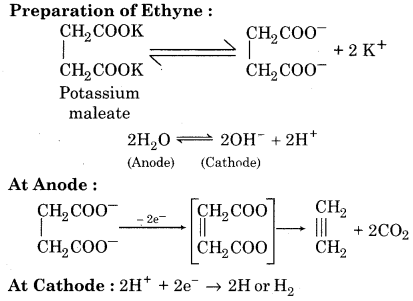 7. Hunsicker Reaction:
The silver salt of a filthy acid can be converted into bromo alkane by refluxing with bromine in the pressure of carbon tetrachloride. This reaction is known as Borodine Hundsdicker reaction or simple Hunsicker reaction.