Question 4.
Which of the following is condensation polymer?
(a) Dacron
(b) Teflon
(c) PVC
(d) Polythene

Question 5.
Which of the following is not a true polymer?
(a) Ethene
(b) Styrene
(c) Isoprene
(d) Butadiene

Question 6.
Which of the following has a ester bond?
(a) Nylon
(b) Bakelite
(c) Terylene
(d) Rubber

Question 9.
Teflon is a polymer of:
(a) Tetrafluoroethylene
(b) Tetraiodoethylene
(c) Tetrachloroethylene
(d) Tetrabromoethylene

Question 10.
Which of the following is a bio-degradable polymer?
(a) PVC
(b) Cellulose
(c) Polythene
(d) Nylon – 6

Question 7.
Give the name of substances used in the vulcanisation of rubber.
Answer:
S (Sulphur).

Question 3.
In free radical polymerisation, where do we use hydroquinone? Explain.
Answer:
Benzoquinone combines with free radical intermediate to form of non-reactive radical, which is highly stabilized by resonance. 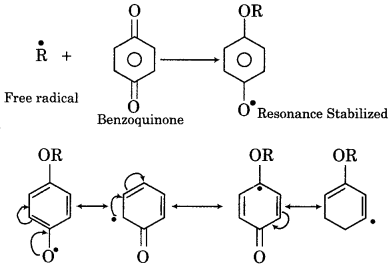 It is also known as terylene and is the condensation product of ethylene glycol and terephthalic acid polymerisation is carried out at 420 to 460 K in the presence of zinc acetate and antimony trioxide. 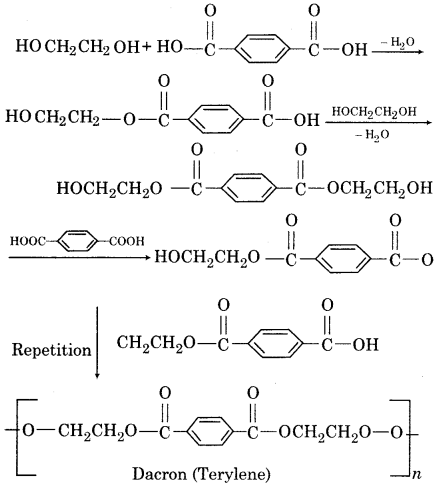 Question 6.
Why rubber is vulcanised? Explain.
Answer:
Natural rubber is soft and sticky at high temperatures and brittle at low temperatures. Therefore rubber is generally used in the narrow
temperature range (283 – 335 K) where its elasticity maintained. So to improve the property of natural rubber, it is vulcanised by heating it with about 5% sulphur at 373 K – 415 K.

Question 7.
What do LDPE and HOPE indicate? How are they formed?
Answer:
Low-Density polyethene (LDPE):
It is obtained by heating very pure ethylene at 350 K – 570 K under a pressure of about 1500 atm in the presence of traces of oxygen. It is a highly branched polymer. It is chemically inert, tough but flexible. It is used for packing, cable insulation and in the manufacture of pipes, toys etc.

High-Density polyethene (HDPE):
It is obtained by polymerisation of ethylene at about 333 – 343 K under 6 to 7 atmospheric pressure in the pressure of catalysts such as triethyl aluminium and titanium tetrachloride. It is chemically inert having greater toughness and hardness.

Question 8.
Write the names of monomers and structures of the following polymers: 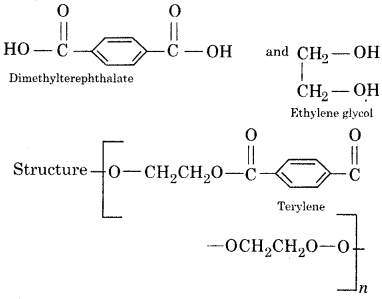 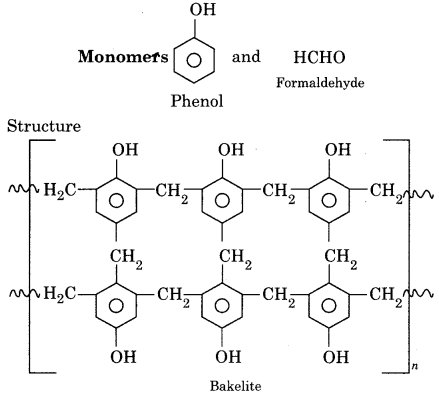 2. Copolymers:
A polymer formed from more than one kind of monomer units is called copolymer or mixed polymer. For example, Buna – S rubber which formed from 1, 3 – butadiene and styrene are examples of the copolymer. 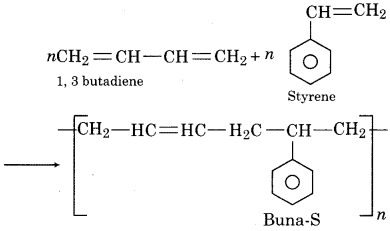 (ii) Type of polymers:
Carothers in 1928 classified polymers on the basis of polymerisation process into two groups:
1. Addition polymers
2. Condensation polymers.
1. Addition polymers:
A polymer formed by direct addition of repeated monomer molecules possessing double or triple bond, without the elimination of any small molecule is called addition polymer.
Example: PVC, Teflon, Neoprene etc.
2. Condensation polymers:
These polymers are formed through a series of independent reactions. These reactions involve the bond formation condensation between two difunctional monomer molecules to form dimers, which in turn, produce tetramers and so on (with the loss of simple molecules like NH3, H2O etc.).
Example: Bakelite, Nylon – 6, 6 etc.
(iii) Type of polymers on the basis of molecular forces operating between different polymer chains, the polymers are of the
following types: 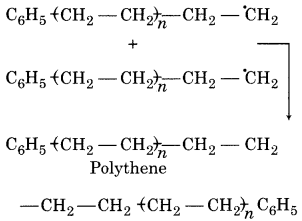 Question 3.
How natural rubber is obtained? Write its composition and structure.
Answer:
To obtain natural rubber first of all latex of rubber plant is obtained. The latex contains, about 25 – 40% of rubber hydrocarbons dispersed in water along with stabilizer proteins and some fatty acids are mixed due to which rubber coagulates and precipitated out. It is separated by filtration. This rubber is known as crepe rubber.
Structure and composition:
Natural rubber may be considered as a linear polymer of isoprene (2 – methyl – 1, 3 butadiene) and also called as cis – 1,4 polyisoprene.

This may be expressed as

where Ni is the number of molecules with molecular mass Mi. 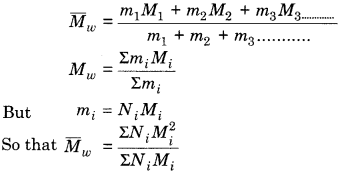 where Ni is the number of molecules of mass Mi.

2. Biodegradable:
The polymers which are degraded by microorganisms within a suitable time period so that the polymers and their degraded products do not cause any serious effects on the environment are called biodegradable polymers.
Example: polylactic acid (PLA), Polyglycolic acid (PGA) and PHB etc.

Question 6.
Write method of polymerisations and uses of the following polymers:

Answer:
1. Bakelite:
It is condensation polymer and is obtained from phenol and formaldehyde in the presence of either an acid or a base catalyst.
Uses:
Soft Bakelite with low degree polymerisation is used for making glue for binding laminated wooden planks and varnishes, High degree polymerisation gives hard bakelite which is making combs, fountain pens, barrels, electrical switches etc.

2. PVC:
It is an addition polymer. A polymer formed by direct addition of repeated monomers without the elimination of byproduct molecules is called addition polymer.
Uses:
PVC plastic is used to manufacture bottles that have application in a wide range of industries.

3. Polyesters:
Polyesters are condensation polymers.
Uses:
It is used