Question 1.
The equation for adsorption isotherm is :

Question 2.
Shape selective catalysis is that reaction which is catalysed :
(a) by enzyme
(b) by zeolite
(c) by platinum
(d) by Zeigler-Natta Catalyst

Question 4.
Which of the following has minimum gold number?
(a) Gelatin
(b) Albumin of egg
(c) Gum arabic
(d) Starch

Question 5.
As2S3 colloid is negatively charged then in which of following its coagulation capacity will be maximum ?
(a) AlCl3
(b) Na3PO4
(c) CaCl2
(d) K2SO4

Question 8.
The adsorption capacity of adsorbate can be increased :
(a) by increasing surface area.
(b) by grinding.
(c) by making porous.
(d) all of the above

Question 9.
Which of the following is not a surface phenomenon ?
(a) Homogeneous catalysis.
(b) Mixing of solids.
(c) Formation of rust.
(d) Electrolytic process.

Question 10.
Arsenic sulphide sol is negatively charged. Which of the following has maximum capacity to convert it as
precipitate ?
(a) H2SO4
(b) Na3PO4
(c) CaCl2
(d) AlCl3

Question 11.
The method of blood purification in human body is :
(a) Electrophoresis
(b) Electric osmosis
(c) Dialysis
(d) Coagulation

Question 12.
The colloidal solution of red colour is obtained by adding some drops of dil HCl in precipitate of fresh ferric oxide. This process is called :
(a) Precipitation
(b) Dialysis
(c) Protection
(d) Dissociation

Question 13.
The zig-zig motion of colloidal particles is studied by:
(a) Zingmondy
(b) Ostwald
(c) Robert Brown
(d) Tyndall

Question 14.
Chromatography is based on:
(a) Physical adsorption
(b) Chemicaładsorption
(c) Hydrogen bond
(d) Adsorption

Question 5.
Explain why alum is used to prevent bleeding from wound of body.
Answer:
Blood is colloidal solution of substances like albumin in water. It has negatively charged particles. The fresh solution of alum or ferric chloride is added on flowing blood which coagulates blood by Al3+ or Fe3+ ions and stop flow of blood.

Question 6.
What is meant by multimolecular colloid?
Answer:
On dissolution a large number of atoms or smaller molecules of a substance aggregate together to form
species having size in the colloidal range (1-1000 mm). These speices thus formed are called multimolecular colloids. e.g. A gold sol may contain particles of various sizes having many gold atoms.

Question 8.
Which adsorbent is used to remove hardness of water ?
Answer:
The group e.g. -COOH, -SO3H, -NH2 etc. present in organic polymers are capable of adsorbing specific ions from solution or water. They used to soften the hard water.

Question 9.
Define sorption.
Answer:
When the phenomenon of adsorption and absorption take place simultaneously then the process is called sorption.

Question 13.
Define gold number.
Answer:
The gold number is defined as the number of milligrams of a hydrophilic colloid that will just prevent the precipitation of 10 mL of a gold sol on the addition of 1 mL 10% NaCl solution.

Question 15.
Write an example of each type of emulsion.
Answer:

Question 16.
What is purple of cassius ?
Answer:
Purple of cassius is a purple pigment formed by the reaction of gold salts with tin (II) chloride. It has been used to impart red colouration as well as to determine the presence of gold as a chemical test.

Question 17.
Write the name of catalyst which convert methanol to gasoline.
Answer:
Zeolite catalyst ZSM-5 is used for converting methanol into gasoline.

Question 1.
Explain the mechanism of micelle formation.
Answer:
Micelles are formed by association of such molecules in which both lyophilic and lyophobic parts are present. Such molecules are called surface active molecules.
Example :
Hydrocarbon chain in soap, sodium stearate C17H35COONa is lyophobic or hydrophobic while -COONa is lyophilic or hydrophilic. The hydrocarbon tails are in the interior of the micelle and C00– ions on the surface. The grease stain absorbed in to the interior of the micelle which behaves like liquid hydrocarbon. As the strain is detached from the fabric, the dirt particles sticking to the strain are also removed.

The formation of micelle and action of detergent can be explained by following figures. 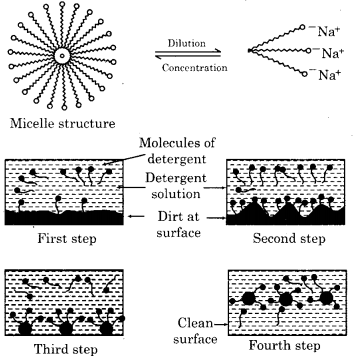 Question 2.
Write short notes on the following
(a) Dialysis
(b) Cottrell precipitator
Answer:
(a) Dialysis: The process of dialysis is based on the fact that colloidal particles can not be diffused from parchment membrane or cell membrane and cell wall while the ions of electrolyte are diffused.

The colloidal solution taken in a bag made of cellophane or parchment. The bag is suspended in water. The impurities of electrolyte are diffused slowly towards outside and pure colloidal solution remains in dialysis apparatus. The process of the separating the paricles of colloids from those of crystalloids by means of diffusion through a suitable membrane is called dialysis.

(b) Cottrell precipitator: Smoke is a colloidal solution of carbon, arsenic compounds, dust etc in air, These carbon partieles are precipitated in direct contact with oppositely charged metallic plates for separation in smoke and the gases which evolved form chimney are smokeless. This precipitator is called cottrell smoke precipitator. 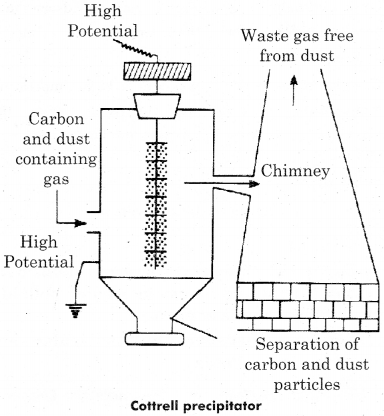 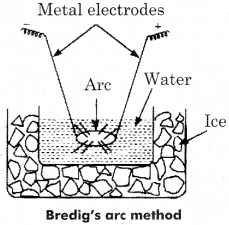 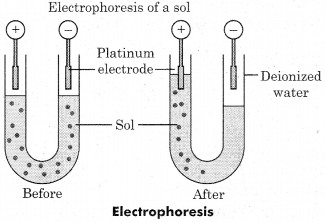 (iii) At medium pressure:
The value of + depends on the power of pressure whose value is between zero to one. 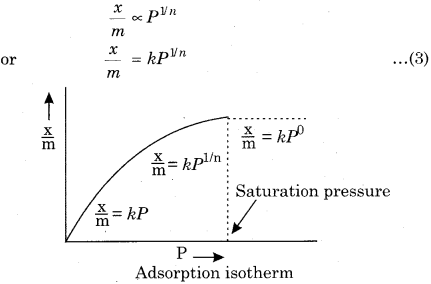 n and k are constant whose value depend on the nature of adsorbate and adsorbent. This relationship was first given by Freundlich. So it is also called Freundlich adsorption isotherm. By taking logarithm of both sides of equation (3). 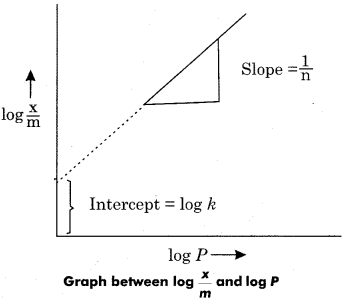 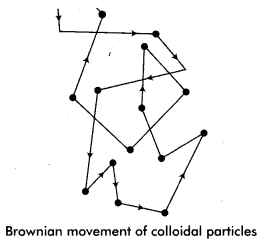 Question 2.
Describe the following methods for the formation of colloidal solution
(i) Bredig-Arc method
(ii) Colloidal mill.
Answer:
(i) Bredig-Arc method:
Colloidal solutions of metals are obtained by this method. The metal, whose sol is to be prepared, is made as two electrodes immersed in dispersion medium such as water. The dispersion medium is kept cool by surrounding it with a freezing mixture.
An electric arc is struck between the electrodes. The tremendous heat generated by the arc vaporises the metals which are condensed immediately in the liquid to give colloidal solution. The colloidal solution of the metals are water repellant so small quantity of KOH is mixed for their stability.

(ii) Colloidal mill:
A colloidal mill is a machine that is used to reduce the particle size of a solid in suspension in a liquid, or to reduce the droplet size of a liquid suspended in another liquid. It consists of two metallic discs nearly touching each other and rotating in opposite directions to very high speed.
The space between the discs of the mill is so adjusted that coarse suspension is subjected to great shearing force giving rise to particles of colloidal size. Colloidal solutions of black ink, paints, varnishes, dyes etc are obtained by this method.

Question 3.
Write a note on shape selective catalyst Zeolite.
Answer:
Zeolite catalyst or shape selective catalyst:
Zeolites are small porous alumina silicates. Their general formula is M3 [(Al2O3)x (SiO2)y]3 mH<sub.2O where n is the oxidation state of metal (M).
Example:
Zeolite catalyst ZSM-5 is used in the conversion of alcohol into petrol (gasoline). The dehydration of alcohol takes place on pores of zeolite and forms a mixture of hydrocarbons. Also refer to article No. 5.7.4 (c).

Question 4.
Give the reasons
(a) Alum purifies drinking water.
(b) A substance can be both colloidal and crystalloid
(c) Sky appears blue.
Answer:
(a) Impure water contains soil particles, bacteria etc. These particles are negatively charged. Alum is added in water to remove them. Al3+ ions present in alum precipitates impurities present in water. Pure water is separated by decantation.
(b) Colloids:
These are not diffused from animal membrane.
Crystalloids:
These are diffused from animal membrane. But the classification of substance given by Grahm was not satisfactory completely, because a specific compound behaves as crystalloids in one solvent and also as colloid in other solvent.
Example:
The aqueous solution of NaCl is crystalloid while it behaves as colloid in benzene.
(c) The wavelength of blue colour is very less hence its scattering is very high. Due to this reason, sky appears as blue.

Question 5.
Discuss the factors affecting adsorption of gases on solid surface.
Answer:
The exact amount of a gas adsorbed at the surface of a solid depends upon the following factors:
(i) Nature of gas (adsorbate):
If critical temperature of gas is higher, the van der Waal’s forces of attraction will be greater so adsorption will be greater. Critical temperatures of a few gases are given below:

(ii) Nature of solid (adsorbent):
Greater the surface area per unit mass of the solid, greater is the extent of adsorption.
(iii) Effect of temperature:
Adsorption is accompained by evolution of heat.