Question 3.
Longitudinal waves can be produced in:
(A) Solid and liquid
(B) Solids and gases
(C) Gases and liquids
(D) Solid, liquid and gases
Answer: B

Question 20.
What is the S.I unit of wavelength?
Answer
Metre (m).

Question 22.
A slinky is held freely, now if we pull the free end of slinky and release, then what type of wave will be produced?
Answer
Longitudinal waves.

Question 23.
What type of motion do the hands of a clock exhibits?
Answer
Periodic motion.

Question 25.
Define frequency.
Answer
The number of wave cycles of a wave that pass a given point in one second is called its frequency. The S.I. the unit of frequency is Hertz (Hz),
(1 Hertz = 1 wave cycle per second).

Question 26.
What is RADAR?
Answer
The word RADAR is an acronym derived from the word RADIO DETECTION AND RANGING. It refers to the technique of using radio waves to detect the presence of objects in the atmosphere.

Question 28.
What do you understand by wave motion?
Answer
Wave motion is a mode of transfer of energy from place to place without material support. It is a kind of disturbance which travels through a material medium.

Question 30.
What is necessary for wave propagation?
Answer
Waves require a medium to travel. The substance through which wave travels is called medium. It can be solid, liquid or a gas. Mechanical wave requires a material medium like air, water, steel etc. for its propagation. The wave cannot travel in a vacuum.

Question 31.
In wave propagation, from one position to another position, what type of transfer takes place, ‘Energy or matter”.
Answer
Energy.

Question 34.
Describe the uses of RADAR and its system of locating position?
Answer

RADAR as a position locating device: Nowadays RADAR has a video monitor that shows the location of all the detected objects within the range of the RADAR device. The computer measures the time, it takes for the signal to reflect off the target and then, calculates how far it is. The basic idea behind the RADAR is: A signal is transmitted, it bounces off an object and it is later received by the same type of receiver. The cathode ray oscilloscope of receiver detects the exact position of an object.

Question 36.
Write the definition of the following:
(a) Amplitude
(b) Frequency
(c) Time period
(d) Wavelength
Answer
(a) Amplitude: The magnitude of the maximum disturbance in the medium on either side of the mean position is called the amplitude of the wave. It is usually represented by the letter A.

(c) Time period: The time taken by two consecutive compressions or rarefactions to cross a fixed point is called the time period of the wave. It is represented by the symbol T. Its S.I. the unit is second (s).

(d) Wavelength: The distance between two consecutive compressions (C) or, two consecutive rarefactions (R) in sound waves, is called the wavelength, represented by X Its S.I. the unit is a metre (m).

(b) The relationship between speed, frequency and wavelength of a wave

⇒Wave velocity = Wavelength x Frequency
The above equation is known as the wave equation. This statement is true for all the types of waves. The velocity of a wave depends on the medium.

Question 40.
Write a full form of SONAR. How do you determine the depth of the sea using echo ranging?
Answer 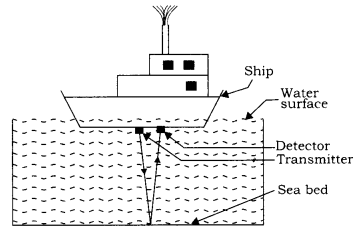 SONAR: The acronym SONAR stands for sound Navigation and Ranging.
This technique is used by ships to detect the presence of submarines, icebergs, sunken ships etc. in the sea. SONAR is a device that uses ultrasonic waves to measure the distance, direction and speed of under water objects. Sonar can also be used for determining the depth of the sea.

Determination of the depth of a sea using SONAR
Let the time interval between transmission and reception of ultrasound signal be t and the speed of sound through sea-water be v. The total distance, 2d travelled by the ultrasound is -2d = v x t

Question 41.
Explain with figure how does human ear works?
Answer
Structure of Human Ear Sound waves from outside is collected by external ear (known as Pinna) and reach the eardrum through the auditory canal. When the sound waves strike the eardrum, it starts vibrating. These vibrations are transmitted across the middle ear by the three ossicles called (the hammer, anvil and stirrup). 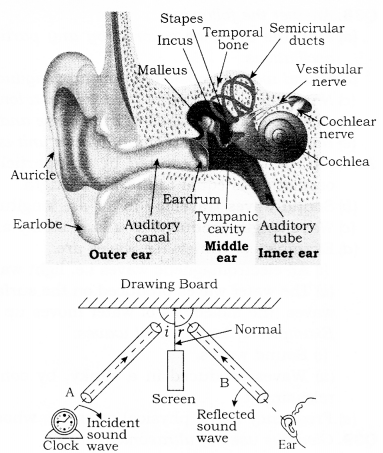 The vibrations produced by the eardrum are amplified. The amplified vibrations are then transmitted to the cochlea. The cochlea is coiled and fluid-filled tube, having the sense organ for hearing. The vibrations of the liquid in the cochlea affect thousands of auditory nerves, which send messages to the brain.

Activity: Take a drawing board and fix it in the vertical position on the table. Put two metallic cardboard tubes A and B. These tubes make some angle with each other. Put a clock near one end of the tube A and a solid screen between the two tubes, so that the sound of the clock may not be heard directly by the ear placed in front of the second tube.

Detection of defects in metal blocks: In this process, ultrasound waves are allowed to pass through the metal block and detectors are used to detect the transmitted waves. Even if there is a small defect, the ultrasound gets reflected back, indicates the presence of the flaws or defect.

Question 44.
Enlist the elements and uses of RADAR?
Answer
Elements of RADAR are:

Question 1.
The region of minimum density through which a wave propagates is called:
(A) Compression
(B) Rarefaction
(C) Crest
(D) Trough
Answer: B

Question 4.
To change a loud sound into feeble sound, we decrease its:
(A) amplitude
(B) wavelength
(C) frequency
(D) velocity
Answer: A

Question 5.
Ultrasound is used to:
(A) get images of internal body parts
(B) detect cracks and flaws in metal blocks
(C) clean parts hard to reach
(D) All the above
Answer: D

Question 6.
Before the main shock wave, earthquake produces:
(A) audible sound
(B) ultrasound
(C) infrasound
(D) none of the above
Answer: C

Question 12.
Before playing the orchestra in a musical concert, a sitarist tries to adjust the tension and pluck the string suitably. By doing so, he is adjusting:
(A) the intensity of sound only
(B) the amplitude of sound only
(C) the frequency of sitar string with the frequency of another musical instrument
(D) the loudness of sound
Answer: C

Question 14.
Hertz is a unit of:
(A) frequency
(B) wavelength
(C) wave speed
(D) displacement
Answer: A

Question 1.
Which mechanical waves are associated with
(a) compression and rarefaction
(b) crest and troughs
Answer
(a) Longitudinal Waves: e.g., Sound waves, waves produced in a slinky.
(b) Transverse wave: Light waves wave produced on the surface of the water (Ripples).

Question 2.
Which wave property determine
(a) Loudness
(b) Pitch
Answer
(a) The amplitude of vibrations determines the loudness of sound.
(b) A frequency of the sound determines its pitch.

Question 3.
Explain how is a sound produced by your school bell?
Answer
When the bell is hammered, vibrations are produced by it. These vibrations produce sound.

Question 8.
Distinguish between loudness and intensity of sound.
Answer
Loudness:

Question 10.
In which of the three mediums; air, water and iron, does sound travel the fastest at a particular temperature?
Answer
Sound travels fastest through iron.

Question 11.
Guess which sound has a higher pitch: guitar or car horn?
Answer
Guitar has a sound of higher pitch.

Question 12.
Give two practical applications of reflection of sound waves?
Answer
(a) In a stethoscope, the sound of a patients heartbeat is guided along the tube of the stethoscope to the doctor’s ear, by multiple reflections of sound.
(b) Soundboards are used in a big hall to direct the sound waves to people.

Question 13.
What are longitudinal waves?
Answer
Longitudinal waves are the waves in which medium particles vibrate in the direction of wave propagation.
For example, sound waves.

Question 21.
Which type of the waves are used as an effective cleaning agent?
Answer
Ultrasonic waves.

Question 24.
Name the physical phenomenon related to sound waves which is being in a stethoscope?
Answer
Multiple reflections of sound used.

Question 25.
What is ‘echolocation’?
Answer
The method used by the animals, like bats, dolphins to locate the objects, by hearing the echoes of their ultrasonic squeaks is called ‘echolocation’.

Question 1.
Define echo. State the conditions for the formation of echo.
Answer
Echo is a repetition of sound due to the reflection of the original sound by a large and hard obstacle.
Conditions for echoes:

Question 2.
Frequency is the most fundamental property of a wave. Why?
Answer
It is due to the fact that when a wave travels from one medium to other, its wavelength, as well as its velocity, will change, but frequency does not change.

Question 7.
(a) What type of waves are produced before the actual earthquake?
(b) Name two species of animals which can detect and produce these waves?
(c) What is the range of hearing for children under the age of five?
Answer
(a) Low-frequency infrasound main shock waves.
(b) Elephant and Peacock.
(c) Between 20 Hz to 25000 Hz.

Question 8.
What is reverberation? How can it be reduced?
Answer
The phenomenon of multiple echoes of the original sound is called reverberation. For better quality of sound reaching to ear, reverberation is avoided or reduced.
In concert halls or auditorium, the following measure is taken:
(a) Roofs of large halls are covered with sound absorbing material.
(b) Heavy curtains are fixed at the doors,
(c) Sound absorbing panels are kept at the stage. 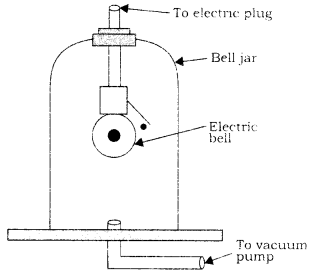 We consider an electric bell inside a closed glass, connected with a vacuum pump. When the glass jar is not vacuumised, the sound reaches to us on the ringing of a bell. But, as the air is taken out from the glass by using a vacuum pump, we will not hear any sound, when there is a perfect vacuum in the jar. This observation confirms the fact that sound requires a material medium to propagate.

Question 12.
When a sound is reflected from a distant object, an echo is produced. Let the distance between the reflecting surface and the source of sound production remains the same. Do you hear echo sound on a hotter day?
Answer
On the hotter day, the speed of sound increases. Due to increased speed, the reflected sound come back of the source earlier than 0.1 second. Hence a distinct echo cannot be heard.

Question 1.
(a) What is reverberation? What will happen if the reverberation time in a big hall is too long? How can we reduce it?
(b) Which property of sound leads to the formation of echo? Briefly explain.
Answer
(a) Reverberation: The repeated reflection of sound waves that results in the persistence of sound for some time is called reverberation.

(b) Reflection of sound leads to the formation of echo. When a sound is repeatedly reflected from a number of obstacles, such as two parallel distant buildings or hills, more than one echo can be heard.

Question 3.
A sonar echo takes 3 sec to return from a whale. How far away is the whale from the sonar? The speed of sound in seawater is 1440 m/s.
Answer
Let the distance from SONAR to whale be ‘d’.
Total distance travelled by echo = 2 d 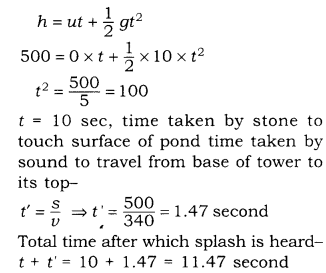 Question 5.
With a diagram explaining the use of curved soundboard behind the speaker in conference halls?
Answer
The arched ceiling and walls of large halls often reflect the sound waves. These reflected sound waves interfere with the words of the speaker. This problem is solved by hanging curtains, putting up screens or by using soundboards. A soundboard is often a concave rigid surface. 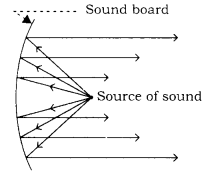