Question 1.
What information do we get from the Vedas? [1]

Question 2.
Write the names of two compositions of Banabhatta. [1]

Question 3.
Which scholar is known as the Einstein of India? [1]

Question 4.
Which was the greatest ruler of Kushan dynasty? [1]

Question 5.
Which scholar addressed Kanishka as a great protector and propagator of Buddhism? [1]

Question 6.
Which ruler is called the “Precursor of Samudragupta” due to his military achievements? [1]

Question 7.
Who is known as the forgotten hero of Marwar? [1]

Question 8.
Who made this statement, “There is no such state in Rajasthan that does not have a battlefield just like Thermopalli and there is no such town which has not produced a brave just like Leonidas.”? [1]

Question 9.
Who is regarded to be the founder of Maratha kingdom? [1]

Question 10.
When and between whom the Battle of Khatoli fought? [1]

Question 11.
Which characteristics of Indus Valley Civilization are seen even in the present time? [2]

Question 13.
In which period did the primitive man learn to cultivate and perform animal husbandry? According to you, what changes must have taken place in the life of primitive man due to this? [2]

Question 14.
Mention any two differences between Mahayana and Hinayana- the two sects of Buddhism. [2]

Question 15.
What similarities do you find between Rao Chandrasen and Maharana Pratap? Mention any two. [2]

Question 16.
Describe any two major conditions of the system of Subsidiary Alliance. [2]

Question 17.
Write any two reasons of the emergence of social reform movements. [2]

Question 18.
When and where did Swami Dayanand Saraswati establish the Paropkarini Sabha? [2]

Question 19.
What is the importance of Vanshavalies (family trees) in historical writing? [4]

Question 21.
Score out the impact of Greek invasion. [4]

Question 22.
“Shivaji did not wish to confine up till Maharashtra, rather he desired to establish Swarajya in entire India.” Give any four arguments in support of this statement. [4]

Question 23.
Mention any four reasons of the failure of the French in the Anglo-French wars. [4]

Question 25.
Religious and social thoughts of Swami Vivekananda are relevant even today. Explain. [4]

Question 27.
Throw light on the efforts made by Motilal Tejawat for the social upliftment of the Bhils. [4]

Question 28.
“Chandragupta was not only a skilled warrior, commander and great winner, but he also was an able ruler.” Interpret this statement. [6]
OR
How did Emperor Ashoka implement his policy of Dhamma? Is Dhamma of Ashoka relevant even in present time?

Question 29.
Discuss the role of Gadar Party in the revolutionary activities. [6]
OR
Which are the reasons responsible for the partition of India? Describe in detail. 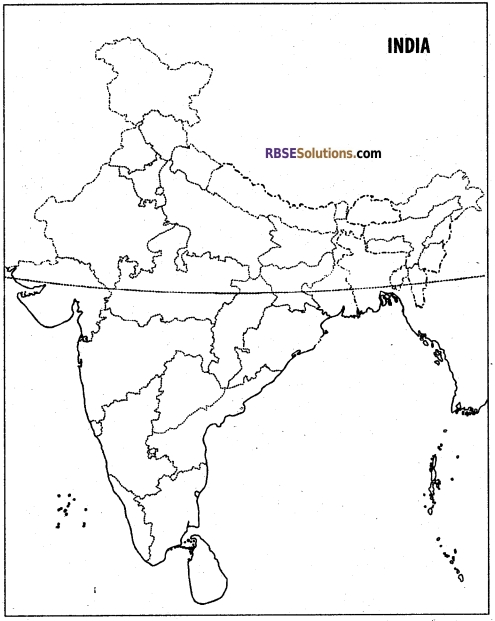