Sources of Marx’s Philosophy:
It can be understood through the following ways :

Major Writing of Marx:
Following are his major writings :

Some Facts Associated with Marx’s Writing:
Following are the facts :

Major Ideas of Marx or Basic Belief of Marxism:

To know and understand Marxism , these are three major bases :

Rules of Dialectical Progress:
Three rules are included in it:

To clarify the effect of economic causes on human history, six stages are described:

According to Marx, there are two sections of the society :

According to Marx those who have control over economy and system are called vulnerable groups and the group which works under it is called exploited group.

Conclusion Economic Explanation of History:
Following are the major points :

Criticism of Class Struggle:
Its major points are given below :

According to Marx, the following impacts are seen on the society of additional value:

Theory of Isolation:
According to Marx, man has become the prey to isolation due to capitalism. This isolation can be understood in the following ways :

Analysis of Capitalism and Future Regarding Conception:

Conception Regarding State and Rule:

Marx’s conception regarding state and rule is criticized. According to critics :

Conception of Marxism Regarding Democracy, Religion and Nationalism:

Criticism of Marxism:
We can understand it in following ways :

Marxisms Contribution to Political Contemplation:
We can understand it through following ways:

Conclusion:
Marx has presented a solid and harmonized program to bring socialism which creates a sensation in the following :

Important Dates and the Events given in the Chapter: 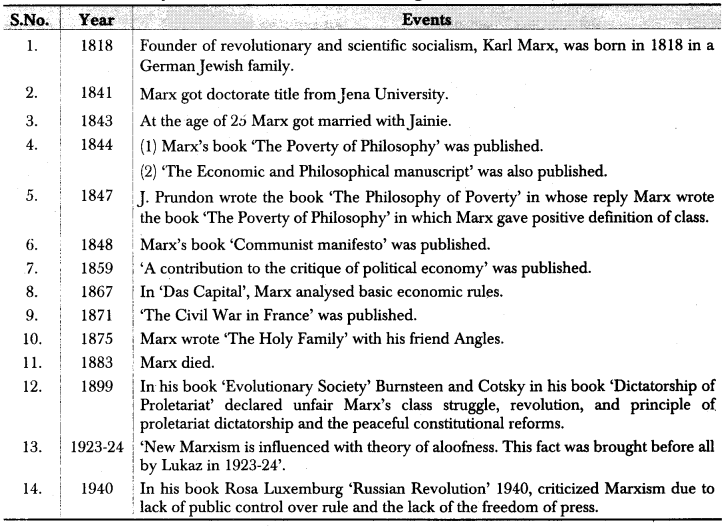