Textbook Activity Based Questions and Answers

Look at the map and answer the following questions : 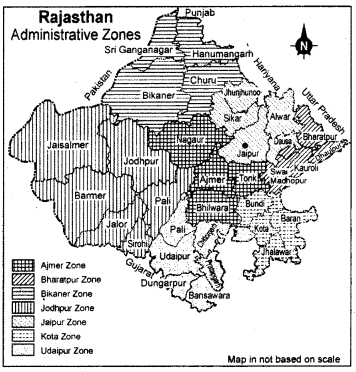 Headquarters of these divisions are in Ajmer, Bharatpur, Bikaner, Jodhpur, Jaipur, Kota and Udaipur, respectively.

Question 3.
Give the names of your neighbouring districts. (Page 106)
Answer:
Sikar is in the north of our district Jaipur, Alwar and Dausa are in the east, Tonk is in the south and Ajmer and Nagaur districts are in the west.

Question 1.
On an outline map of Rajasthan, colour your division and write the name of your district. (Page 106)
Answer: 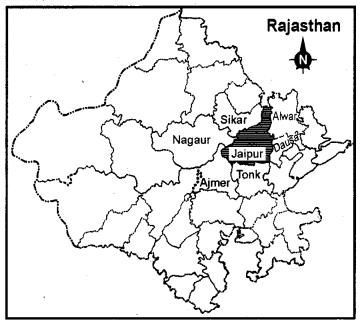 Question 2.
Complete the given table below with the help of your teacher. (Page 111)
Answer:

Note – The students may complete the table according to their respective district.

(ii) Disputes are resolved on the basis of mediation and counselling outside courts through-
(a) Civil Courts
(b) Criminal Courts
(c) Lok Adalats
(d) Revenue Courts
Answer:
(c) Lok Adalats

Question 2.
Fill in the blanks

Question 3.
Match Column A with Column B
(A)

Question 6.
What are the functions of the ‘Jan Aabhav Abhiyog and Satarkta Samiti’?
Answer:
Jan Aabhav Abhiyog and Satarkta Samiti (Public Lack Indictment and Vigilance Committee) looks into the complaints made by the people and the problems faced by them. This committee examines complaints regarding electricity, water, telephone, transport, pension cases, encroachment on government land and helps in resolving them.

Question 8.
Explain the working of a criminal court.
Answer:
Murder, assault, theft, violation of law and disturbing peace, are all criminal acts and are tried in criminal courts. In a criminal case, the complainant has to first inform the nearest police station under whose area the crime took place. This is called the First Information Report (FIR). The police then investigate the case and collect relevant evidence, and then present the challan of the case in court. The court examines the evidence, hears the witnesses, also examines both the sides concerned and then delivers the judgment.

There are Additional District Magistrates (ADMs), Sub- Divisional Magistrates (SDMs) and Tehsildars to maintain law and order in their respective areas. In case of disruption in the law and order system in any part of the district, the police department takes administrative action under the supervision of the Superintendent of Police. It examines the basis of FIR and performs the work of providing punishment to the culprits. At times, it also takes help of other departments in arresting law affenders and order breakers and provides punishment to them.

Question 2.
In which division is Sri Ganganagar situated?
(a) Jodhpur
(b) Bikaner
(c) Jaipur
(d) Udaipur
Answer:
(b) Bikaner

Fill in the blanks in the following sentences

Question 5.
Write the names of any four schemes run by central and state governments for the welfare of the poor.
Answer:

Question 1.
Which facilities are provided by the Chief Medical and Health Officer in a district and who are the officers who help him in this task?
Answer:
The Chief Medical and Health Officer takes assistance from his subordinator medical officers at block level, doctors, nurses, midwives, etc. and provides large number of medical and health services in the district such as vaccination, family welfare, woman and child healthcare, etc. He also organizes de-addiction camps, and helps in running dispensaries and hospitals for public welfare.

Question 2.
Explain the judicial process of Lok Adalats.
Answer:
There is a system of lok adalats in the country. These courts have been set up for the settlement of disputes through mutual consent outside the formal structure of the courts. There is a permanent lok adalat in every district, and they can also be held at lower level, in accordance with a schedule. The judge, with the help of some prominent persons of the area, seeks to settle the dispute by mediation and counselling. Any agreement that is arrived at, is accepted by the regular courts. Lok adalats are very popular in Rajasthan. Mutual disputes are eliminated through mutual consent and cheap and quick justice is obtained.

Here, the deputy tehsildar, tehsildar, and additional collector are the judicial authorities and such revenue cases are produced in their courts at the lower level. The district collector is the final court of appeal in these cases. Apart from these, there are some special types of courts which hear cases associated with some special issues. These include family court, court for scheduled castes and scheduled tribes, labour court, motor vehicles’ accident court and district consumer forum, etc.