Rajasthan Board RBSE Class 6 Social Science Chapter 17 Our Past

Textbook Activity Based Questions and Answers

Question 1.
Imagine and discuss how people lived in ancient times. (Page 114)
Answer:
The ancient life would have been very different from the modem social life. It has been found from various archaeological excavations that there was lack of fire, agriculture and roads and means of transportation in ancient times.

Question 2.
Collect stones of different shapes and think if any tool can be made from them. Prepare some tools and exhibit them.
Answer:
Do this activities with the help your elders or teacher.

Write the correct answers of Q. 1 and Q. 2 in brackets :
Question 1.
First excavation of Sindhu valley civilization was done at
(a) Mohenjo-Daro
(b) Harappa
(c) Kalibanga
(d) Lothal
Answer:
(b) Harappa

Question 8.
Comment on town planning in Sindhu-Saraswati civilization.
Answer:
Town planning in Sindhu – Saraswati civilization was in a developed state. The city was divided into fort and low category brick buildings. The buildings of cities were spread like net. The roads intersected at right angles and the cities were divided into rectangular blocks. Conference room, market, chowks, bathrooms, etc. have also been found in excavations which testify to the well – developed planning of that time.

Match Column A with Column B
(A)

Fill in the blanks

Question 1.
What is meant by stone plaques?
Answer:
Writings inscribed on stone or metallic plates are known as stone plaques.

Question 2.
What is meant by archaeological and literary sources?
Answer:

Question 3.
What is meant by family trees?
Answer:
Along with traditions such as languages, scripts, literature, history writing, etc. writing family trees has also been a unique tradition. It is an easy medium to know about history. In these, important events right from birth till death are maintained in the ledgers kept by family tree writers.

Question 4.
Throw light on the life of pre – historical man in brief.
Answer:
Pre – historical man led a nomadic life. He lived in small groups and used to roam in the jungles in search of food along with the head or the leader of the group. Eating food by hunting animals, living in caves was the daily routine of pre-historical man. He used fire in order to protect himself from wild animals and made small and big sharp – edged tools from small and big pieces of rocks and used them.

Question 5.
Write a brief note on river Saraswati.
Answer:
River Saraswati – River Saraswati occupies an important place in Indian culture. That the Vedas were written on the bsinks of the SarEiswati is Em established fact. Vedic culture was bom on the banks of the river. Mount Shivalik is considered to be its source of origin and it traverses through Haryana and Rajasthan to Kutch. Subsequently, this river disappeared. Recent discoveries have shown that a cultured Emd a well-organized civilization originated and developed on the banks of the river Saraswati. The satellite pictures clearly show the complete route of this river.

Question 6.
Describe the town planning of the Harappan period.
Answer:
Town planning was in a developed state in the Harappan period. The buildings had thick brick walls with windows Emd doors, large oil tanks, drains near kitchens, places for keeping animals have also been found in the buildings. Some of the houses had wells within them and bathrooms have also been found in the houses. Ruins of the buildings show that houses were built according to the needs of the family. The buildings were very large Emd open.

Question 7.
Give a brief description of the archaeological place named Pachhmata (Rajsamand).
Answer:
The archaeological place named Pachhmata is situated 100 km away from Udaipur in Pachhmata village. This is an important place of Banas culture of Mewar region. Many valuable and artistic things such as embellished jar, bangles of oyster and green stone, earthen pots and two big furnaces have been found here.

Question 1.
Give a detailed description of the Sindhu – Saraswati (Indus River) Civilization.
Answer:
When pre-historical man learnt farming, animal rearing, building villages and to fulfill his requirements, some people started producing things in larger quantity than required by them and they started 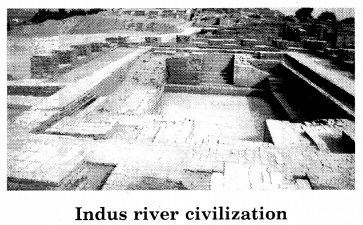 The most unique characteristic feature of this civilization was its excellent town planning. Conference rooms, markets, chowks, bathrooms have been found in the excavations of the towns of this civilization, which testify to the well – developed town planning of that time. Excavations at this site show that the city population was divided into three categories. The first were the rulers who lived in the fort, the second were the traders who lived in the city and the third were the labourers and the farmers doing manual jobs and producing food grains, etc. lived in the surrounding villages. Articles found in the excavation of the Sindhu – Saraswati civilization at all the places bear a similarity. We get an idea about the lifestyle and living standard of the people of that time. It is estimated that this civilization existed for nearly 1000 years.